Elements of the economics of the industry 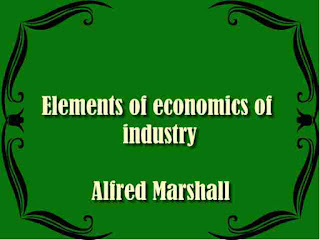 being the first volume of Elements of economics
An adaptation of the first volume of the author's Prindvles of Economics 2nd ed., 1891) to the needs of junior students. By far the best manual for the general reader who needs thoughtful guidance through the labyrinth of economic difficulties.
This Volume is an attempt to adapt the first Volume of my Principles of Economics (Second Edition, 1891), to the needs of junior students. The necessary abridgement has been effected not systematic compression so much as by the omission of many discussions on points of minor importance and of some difficult theoretical investigations.
For it seemed that the difficulty of an argument would be increased rather than diminished by curtailing it and leaving out some of its steps.
The argumentative parts of the Principles are therefore as a rule either reproduced in full or omitted altogether; reference in the latter case being made in footnotes to the corresponding places in the larger Treatise. Notes and discussions of a literary character have generally been omitted.
The influence of Trade-Unions on wages depends much on the course of Foreign Trade and on Commercial Fluctuations; and therefore in the Principles, all discussion of the subject is postponed to a late stage. But in the present Volume, the practical convenience of discussing it in close connection with the main theory of Distribution seemed to outweigh the disadvantages of treating it prematurely and in some measure incompletely; and a Chapters on Trade-Uniotis has been added at the end.
The changes In this edition follow those made in the third edition of my Principles. Book I. Ch. iv. and v. and Book IIT. Ch. VI. have been rewritten in order to make more clear how closely the economist adheres in substance to the methods of inference and judgment of ordinary life; and how thorough are the harmony and the mutual dependence be- tween the analytical and the historical methods of economic study. In Book II., Ch, iv. and v. have been thrown together to make a new Chapter iv. ; the old definition of Capital regarded from the point of view of the businessman is retained, but Capital is defined from the general point of view as wealth which yields " income " in forms that are admitted in the broader use of the term in the market place. Book VT. Ch. I. and II. have been recast, with further explanations, and a fuller rehearsal of the chief results obtained in the earlier Books.
book details : Download Elements of the economics of industry - PDF ebook 19.7 MB