The diary of a citizen of Paris during 'the terror" 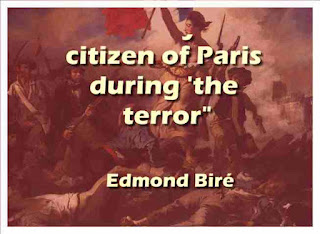 This does not pretend to be a history either of the Revolution or even of that period which, though so short, was yet so full of crime and anguish, and A\hich will forever bear the dread name of the editor. The most that are attempted in these pages is to present to the world a phase of this lugubrious epoch in the form of a rough and simple sketch.
I have read the greater part of the newspapers of the time, and have perused a considerable number of pamphlets; I have paid particular attention to bills and posters, and M. Gustave Bord was good enough to place at my disposal his collection of miscellaneous documents, made with great care and diligence.
Living for months together amidst these witnesses of events long past, it almost seemed to me that I had become their contemporary; that, like the ' awakened sleeper ' of poor Cazotte — one of the first victims of the Terror — I, too, walked in the streets of the Paris of '93; that I frequented its public places; that, after a sitting of the Convention, I strolled into a cafe of the Maison Egalite; that I mingled Avith the crowd in the squares and the theatres, waiting my turn with the people in front of the bakers''-shops, following them sometimes with a heavy heart and swimming eyes as far as the Place de la Revolution or the barrier of the Trone Ren verse, where the tumbrel came jolting along through the midst of the hooting mob, and heads fell to the cry of ' Vive la Republique !'
Recognising that the sole means of ridding my mind of these dark visions was to commit them to paper, I did so, and called my notes " The Diary of a Citizen of Paris during the Terror." I laid them aside for some time after writing them; then one day I re-read my lines coolly and critically, as I would have read a stranger"'s work. Deciding to publish them, I thought it not unwise to add some notes and comments, for which I have drawn upon the latest works of historians and critics.
I have left nothing undone in order to conscientiously fulfil my duty as an editor, and I have not hesitated to adduce any number of proofs, even at the risk of seeing the text swallowed up by the notes. The latter will at least prove, by their number and extent, that the most scrupulous care has been observed in the compilation of the Diary, that it contains no fiction, and that all the facts, even the most insignificant in appearance, are based upon authentic and contemporary documents. History, I know, is a Muse, and the most serious and severe of all.
But though she should always be treated with respect, can she not occasionally be approached more familiarly? Are we forbidden to invite her to descend from the heights upon which she loves to hold converse with masters, and would it be derogatory to her dignity to chat for a moment with us in a manner more befitting our weakness? I, for myself, do not regret having followed her along humbler paths, where I have unearthed many lost details, many generous but forgotten acts, much noble devotion which it is a pleasure to once more bring to light.

I. The first sitting of the convention
Ii. The sponsors of the republic
Iii. Jacques gazette
Iv. The journalists in the convention
V. Royalist republicans.
Vi. Royalist republicans (concluded)
Vii. The Tuileries.
Viii. The offering to liberty
Ix. Oaths of allegiance.
X. A fete at madame Talma's
Xi. The royal family in the temple
Xii. A relic
Xiii. The nine refugees
Xiv. The forty-eight sections of Paris
Xv. The section of the pantheon
Xvi. Naming the streets of Paris
Xvii. Brissotins and robespierrists
Xviii. Paris during the first days of November,
Xix. The witnesses for Louis xvi.
Xx. M. Roland de la platiere
Xxl the fete of sainte-genevieve
Xxii. ' castor and pollux '
Xxiii. The gilles affair
Xxiv. ' the regicides '
Xxv. The hostages of louis xvi..
Xxxv. Louis xvi. And the constitution
Xxvii. Danton and the ' grey friars ' club
Xxviii. The midnight mass
book details : Download Volume 1 - 19.7 MB