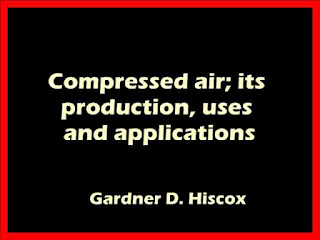 Comprising the physical properties of air from a vacuum to its liquid state, its thermodynamics, compression, transmission and uses as a motive power ... With forty air tables and five hundred and forty-five illustrations
The literature on the commercial uses of compressed air, especially in its application to the mechanic arts, has not kept pace with the growing importance of the subject, having been confined, in the main, to occasional papers presented to engineering societies, and to special articles appearing at intervals in the various technical journals of this and foreign countries, or in the still more fugitive form of trade circulars; but even these, fragmentary publications at best, cover scarcely more than the past two decades.
The thermodynamic treatment of air under compression, its transmission and expansion, have been ably worked out by careful experimenters and communicated to scientific societies by competent writers; these articles, valuable in themselves, have not met the requirements of the modern engineer, whose immediate necessities demand a more complete gathering of the widely distributed data relating to this subject, as well as a better classification of the known properties of the atmosphere.
This want has long been apparent to the author by reason of many years of experience in answering constantly recurring inquiries relating to compressed air, and to its direct application to the commercial needs of the day.
The fund of information acquired and carefully preserved by the author during the many years of his editorial work is now brought into compact form \^ and in a single volume for ready reference. That this has been no light task will be apparent from even a casual perusal of the present work.
The progressive advancement in experimental research extends in two opposite directions: the partial vacuum incident to the ordinary operations of an air pump or the condensation of watery vapour has been extended by other methods to the highly attenuated results obtained in the manufacture of incandescent lamps; while, on the other hand, compression has extended through its various stages until, and in connection with a very low temperature, the final product, liquid air, has been made commercially available.
Many of the difficulties in regard to the expression of mathematical details and thermodynamic formulas have arisen in consequence of this progressive advancement; so also, the knowledge of the atmospheric relation to other elements is yet in a progressive state; the practical application of compressed air for doing mechanical work is of so recent date that the design and construction of any of the most useful machines operated by compressed air rest upon empirical rather than scientific formulas.
It is one of the objects of the present volume to make available the ascertained facts of experimental research in atmospheric phenomena, and, so far as possible, the fundamental basis upon which such ascertained facts securely rest.
To limit the consideration of the properties of air when simply compressed above the ordinary pressure of the atmosphere was believed to be wanting in scope to make the treatment of the subject complete; this work includes, therefore, a consideration of the properties of air below atmospheric pressure, for the reason that we are surrounded by an atmosphere compressed by gravity, but it is used in the arts in many ways much below atmospheric pressure, even approaching the zero condition of a vacuum, so that, remote as the connection appears, this subject of partial pressures below the atmosphere properly belongs to a treatise on compressed air.
The wide range of manufacturing interests in which compressed air plays an important or even a subordinate part is such that special machines for its production and utilization are as numerous as the diversified industries of our day; this condition has suggested the large number of illustrations employed to place before the reader the salient features of only the latest and best designs. These designs include portable machines, together with a large number of individual and special tools designed for and greatly contributing to the lessening of manual labour, as ^Yell as tending to increase the output of useful work.
The development of the caisson method in submarine work for engineering structures has become very general; requiring not only special appliances, but introducing problems in hygiene which do not ordinarily occur in engineering practice; the sensations and physical effect of varying air pressures and temperatures upon workmen engaged in a labour of this kind belong essentially to the subject-matter of this work, and have been included.
Within the past few years, an important and useful commercial effect has been obtained by the use of compressed air and its subsequent expansion in the production of temperatures suited to refrigerating purposes; such machines are in use on warships and other vessels in which, for one reason or another, the use of ammonia gas is either objectionable or prohibitive.
The author, recognizing the economic value of such machines, has given considerable space to the consideration of the physical and thermodynamic problems connected therewith.
There are many interesting problems in this connection that lie beyond the domain of commercial refrigeration, in which, by the production of temperatures far below Fahrenheit zero and approaching the absolute zero, the critical temperature of the air is passed and its physical condition changed from a gaseous to a liquid, and thence to a solid-state; as this subject has been fully treated in a recent volume on Liquid Air, it has therefore been given but limited space in this work.
book details : Download 46 MB - PDF ebook