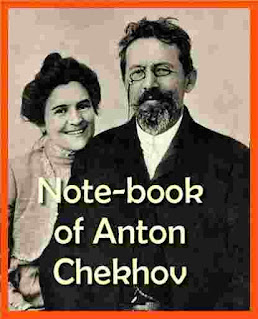 This volume consists of notes, themes, and sketches for works that Anton Chekhov intended to write, and are characteristic of the methods of his artistic production. Among his papers was found a series of sheets in a special cover with the inscription:
"Themes, thoughts, notes, and fragments." Madame L. O. Knipper-Chekhov, Chekhov's wife, also possesses his notebook, in which he entered separate themes for his future work, quotations which he liked, etc. If he used any material, he used to strike it out in the notebook.
The significance which Chekhov attributed to this material may be judged from the fact that he re-copied most of it into a special copybook.
Excerpt from his diary
His income is twenty-five to fifty thousand, and yet out of poverty, he shoots himself. [21] Terrible poverty, desperate situation. The mother is a widow, her daughter is a very ugly girl.
At last, the mother takes courage and advises the daughter to go on the streets. She herself when young went on the streets without her husband's knowledge in order to get money for her dresses; she has some experience.
She instructs her daughter. The latter goes out, walks all night; not a single man takes her; she is ugly. A couple of days later, three young rascals on the boulevard take her. She brought home a note which turned out to be a lottery ticket no longer valid. Two wives: one in Petersburg, the other in Kertch. Constant rows, threats, telegrams.
They nearly reduce him to suicide. At last, he finds a way: he settles them both in the same house. They are perplexed, petrified; they grow silent and quiet down.
His character is so undeveloped that one can hardly believe that he has been to the University.
And I dreamt that, as it were, what I considered reality was a dream, and the dream was reality. I observed that after marriage people cease to be curious.
It usually takes as much time to feel happy as to wind up one's watch. A dirty tavern near the station. And in every tavern like that, you will find salted white sturgeon with horseradish. What a lot of sturgeon must be salted in Russia!
Book details : Download Anton Chekhov Notebook - PDF ebook - 5 MB