A brief history of France 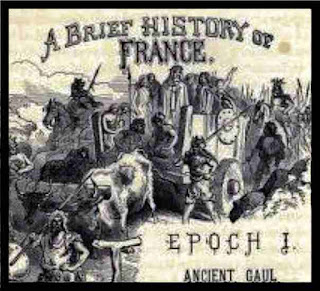 This book is for the general reader contains attractive illustrations to keep you keep on reading, It classifies French History into epochs. I will collect Barnes's Brief History Series because I think they are interesting and great sources of information with attractive illustrations.
This work, the second in order of publication of the Barnes's Brief History Series, is prepared upon the same general plan as the United States History, which has met with such marked approval.
The peculiar features are the division of the book into great historical epochs; the Summary at the closest each dynasty; the Chronological Review and the References for Reading at the end of every epoch; the Geographical Questions at the beginning of each epoch to familiarize the pupil with the names and location of the places which were to become the scenes of great events; the collection in foot-notes of anecdotes, biographies, and interesting facts; the Historical Recreations; the frequent paragraphs on the Condition of the Country; the portraiture of the manners, customs, and domestic life of the people; the distinctive description of each great battle by giving the pivotal point on which its issue turned; the use of bold, topical headings which attract the eye at a glance; the lists of distinguished persons in the different eras; and finally the linking of events by tracing their cause and effect, and thus giving something of the philosophy of history.
The spirit of the modern method of historical study is fully recognized, but great pains have been taken to avoid the opposite error of ignoring those great political events and characters by which the current of history has been guided. Kings, queens, courts, battles and sieges have too largely decided the fate of nations and the progress of civilization to be lightly touched upon by one seeking to understand the causes of events. In all times past, the lives of a few great men have formed the warp of history, while that of the masses has been but the filling.
To prevent frequent repetitions, and also to save space in this Series, careful distribution of topics has been made.
Thus the Merovingian and Carlovingian dynasties are treated quite briefly in this work, as they were Prankish lines, and occur again in the " German History."
The Crusades and Feudalism were general in their causes and effects, and will therefore be described more particularly in the " Brief History of the World." The numerous naval battles belong more naturally to the " English," and the invasions of the Goths and Vandals to the " Roman " History. Within the brief limits of a Preface, it would be impossible to enumerate the authors who have been consulted in the preparation of this book.
On all doubtful points, down to the Revolution, Henri Martin, the accepted authority in Prance, has been taken as a standard; for later dates, Duruy, except during the time of Napoleon, where Lamprey has been followed. In general, the author would hereby acknowledge his constant indebtedness to the various works enumerated in the References for Reading at the close of each period. French history is full of warnings against despotism, an aristocracy, the abandonment of religion, the degradation of liberty into a license, and the danger of an ignorant, excitable population. In no other history can the hand of a Divine Avenger be more clearly seen in the infliction of fearful national punishments.
The American youth who cons this story well cannot but draw lessons of experience to guide him amid the perils which so grievously threaten our own national peace.
The French nasal, which can only be learned by ear, is represented in this book by a black letter ii. The French have also no perfect equivalent in English.
The nearest approximation has been sought to be given, Webster has been followed in the characters used to designate the different vowel sounds. Although equal stress is claimed for each syllable in a French word, a native Frenchman gives a certain rising inflexion to the final one, nearly amounting to our accent.
book details : Download  A brief history of France 22 MB - PDF ebook