Time and free will, an essay on the immediate data of consciousness. 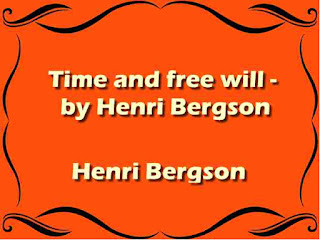 Henri Bergson was born in Paris, October 18, 1859. He entered the Ecole normale in 1878, and was admitted agrege de philosophie in 1881 and docteur es lettres in 1889. After holding professorships in various provincial and Parisian lycees, he became maitre de conferences at the Ecole normale Superieure in 1897, and since 1900 has been a professor at the College de France. In 1901 he became a member of the Institute on his election to the Academic des Sciences morales et politiques.
A full list of Professor Bergson s works is given in the appended bibliography. In making the following translation of his Essai sur les donnees immediate^ de la conscience I have had the great advantage of his co-operation at every stage, and the aid which he has given has been most generous and untiring. The book itself was worked out and written during the years 1883 to 1887 and was originally published in 1889.
The foot-notes in the French edition contain a certain number of references to French translations of English works. In the present translation, I am responsible for citing these references from the original English. This will account for the fact that editions are sometimes referred to which have appeared subsequently to 1889. I have also added fairly extensive marginal summaries and a full index. In France, the Essai is already in its seventh edition. Indeed, one of the most striking facts about Professor Bergson s works is the extent to which they have appealed not only to the professional philosophers but also to the ordinary cultivated public.
The method which he pursues is not the conceptual and abstract method that has been the dominant tradition in philosophy. For him reality is not to be reached by any elaborate construction of thought: it is given in immediate experience as a flux, a continuous process of becoming, to be grasped by intuition, by sympathetic insight.
Concepts break up the continuous flow of reality into parts external to one another, they further the interests of language and social life and are useful primarily for practical purposes. But they give us nothing of the life and movement of reality; rather, by substituting for this an artificial reconstruction, a patchwork of dead fragments, they lead to the difficulties which have always beset the intellectualist philosophy, and which on its premises are insoluble. Instead of attempting a solution in the intellectualist sense,
Professor Bergson calls upon his readers to put these broken fragments of reality behind them, to immerse themselves in the living stream of things and to find their difficulties swept away in its resistless flow. In the present volume Professor Bergson first deals with the intensity of conscious states. He shows that quantitative differences are applicable only to magnitudes, that is, in the last resort, to space, and that intensity in itself is purely qualitative.
Passing then from the consideration of separate conscious states to their multiplicity, he finds that there are two forms of multiplicity: quantitative or discrete multiplicity involves the intuition of space, but the multiplicity of conscious states is wholly qualitative.
This unfolding multiplicity constitutes duration, which is a succession without distinction, an interpenetration of elements so heterogeneous that former states can never recur. The idea of a homogeneous and measurable time is shown to be an artificial concept, formed by the intrusion of the idea of space into the realm of pure duration.
Indeed, the whole of Professor Bergson s philosophy centres around his conception of real concrete duration and the specific feeling of duration that our consciousness has when it does away with convention and habit and gets back to its natural attitude.
At the root of most errors in philosophy, he finds a confusion between this concrete duration and the abstract time which mathematics, physics, and even language and common sense, substitute for it. Applying these results to the problem of free will, he shows that the difficulties arise from taking up one s stand after the act has been performed and applying the conceptual method to it.
From the point of view of the living, developing self these difficulties are shown to be illusory, and freedom, though not definable in abstract or conceptual terms, is declared to be one of the clearest facts established by observation.
book details : Download Time and free will  - PDF ebook