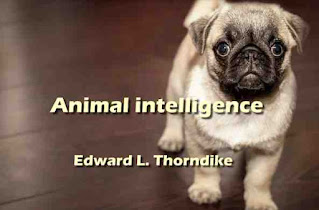 The main purpose of this volume is to make accessible to students of psychology and biology the author's experimental studies of animal intellect and behaviour.
These studies have, I am informed by teachers of comparative psychology, a twofold interest. Since they represent the first deliberate and extended application of the experimental method in animal psychology, they are a useful introduction to the later literature on that subject.
They mark the change from books of general argumentation on the basis of common experience interpreted in terms of the faculty psychology, to monographs reporting de-tailed and often highly technical experiments interpreted in terms of original and acquired connections between situation and response.
Since they represent the point of view and the method of present animal psychology, but in the case of very general and simple problems, they are useful also as readings for students who need a general acquaintance with some sample of experimental work in this field. 1 'Animal Intelligence: An Experimental Study of the Associative Processes in Animals' ('98), 'The Instinctive Reactions of Young Chicks' ('99), 'A Note on the Psychology of Fishes' ('99), and 'The Mental Life of the Monkeys' ('01). I have added a theoretical paper, '
The Evolution of the Human Intellect,' which appeared in the Popular Science Monthly in 1901, and which was a direct outgrowth of the experimental work. I am indebted to the management of the Psychological Review, and that of the American Naturalist and Popular ScienA Monthly, for permission to reprint the three shorter papers.
It has seemed best to leave the texts unaltered except for the correction of typographical errors, the renumbering of tables and figures, and redrawing the latter. In a few places, where the original text has been found likely to be misunderstood, brief notes have been added. It is hard to resist the impulse to temper the style, especially of the ' Animal Intelligence,' with a certain sobriety and restraint.
What one writes at the age of twenty-three is likely to irritate oneself a dozen years later, as it doubtless irritated others at the time.
The charitable reader may allay his irritation by the thought that a degree of exuberance, even of arrogance, is proper to youth. To the reports of experimental studies are added two new essays dealing with the general laws of human and animal learning.
Contents:
The study of consciousness and the study of behaviour.--Animal intelligence.--The instinctive reactions of young chicks.--A note on the psychology of fishes.--The mental life of the monkeys.--Law and hypotheses of behaviour.--The evolution of the human intellect
book details : Download Animal intelligence - PDF ebook - 6 MB