A dictionary of American politics 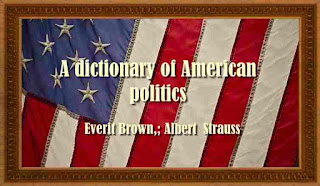 A Brief Examination of this volume will convey it clearer idea of its contents than any statement could do, yet a few words may be permitted concerning the aim of the authors. It is for those who are more or less interested in the politics of the United States, but who have neither time nor opportunity for seeking information in various and out-of-the-way places, that this book has been prepared.
The main facts in the political history of the federal government from its foundation to the present moment are given under appropriate headings and in alphabetical order. The formation of the Constitution, its growth and interpretation, have been explained.
The rise and fall of parties have been recounted. Famous measures, national movements and foreign relations have received full attention. Especial care has been exercised in de- scribing the practical workings of the government in its various branches, and numerous lists of the more prominent officials are furnished.
There will also be found accounts of the origin and meaning of political slang expressions, familiar names of persons and localities, famous phrases, and the like. Most of these facts are scattered in volumes not generally accessible; many of them that circulate chiefly by word of mouth are hard to find explained in print; some are of such recent date that they have been recorded, only in the daily press. To find these items gathered together in a single volume of the moderate compass has hitherto been impossible.
Liberal use has been made of every source of information in preparing this volume. The facts have been stated with as great accuracy as could be attained by unstinted care and in the briefest manner consistent with complete information.
The authors have endeavoured to write without bias or partiality in any direction. It will be noticed that cross-references have been freely used, without which much space would necessarily have been wasted, and the suggestion may be made that even in the absence of references the reader should turn to topics mentioned in the text for the full view of a subject. With the hope that this book may help to fill an exist- ing vacancy, it is submitted to the public.
Example:
Abolitionists. —
The first society for the abolition of slavery was formed in Pennsylvania in 1774; New York followed in 1785, Rhode Island in 1786, Maryland in 1789, and Connecticut, Virginia and JSTew Jersey before 1792. Among the presidents of the New York society were John Jay and Alexander Hamilton. These societies did nothing except petition Congress and were seldom heard of after 1808. Colonization then became a favourite subject, until in 1829 The Genius of Universal Emancipation y a newspaper advocating '^im- mediate^' abolition, was published in Baltimore by William Lloyd Garrison, of Massachusetts. Fined for one of his articles, and for non-payment of the fine imprisoned, he soon removed to Boston, where, January 1, 1831, he began the publication of Tlie Liberator, He opposed colonization, refused to recognize the Constitution, which he proclaimed " a covenant with death and an agreement with hell," and declared for "no union with slaveholders." Public interest was aroused.
A dictionary of American politics: comprising accounts of political parties, measures and men, and explanations of the Constitution, divisions and practical workings of the government, together with political phrases, familiar names of persons and places, noteworthy sayings, etc., etc
book details : Download A dictionary of American politics - 18 MB