8000 volumes for a popular library, with notes 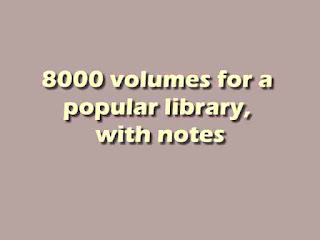 The history of the undertaking A. L. A. Catalog is set forth in the editorial preface which follows. The first edition was, it will be noticed, issued by the Bureau of Education, and by the direct action of Congress. Since 1893, however, the Library of Congress, promoted into the position of a national library for the United States, has come to be the logical agent of the government for such an under-taking presumed to be in the interest of American libraries.s as a whole. It agreed to publish and distribute this revised edition. As appears from the editor's preface, however, its cooperation has actually gone further than this: it printed also and distributed the preliminary triallists, and it prepared the material which forms the Dictionary section of the Catalog.
This it has also reproduced with fuller entries oh cards: so that a complete card catalogue of the entire 8,000 volumes may be procured from it, at nominal cost, under its system of card distribution. It did not, however, take a direct part in the selection of the books. Distribution. —
A single copy of the Catalog complete, in cloth, will be sent free of the chaise to every library in the United States, and to foreign libraries on the exchange list of the Library of Congress, or making a specific request. Other copies, either of the complete work or of either party, in cloth or paper, may be had by addressing
The Superintendent of Documents, Washington, D. C, and forwarding the price below stated (a nominal chaise, to prevent waste): Complete (parts 1 and 2). Price: Cloth 50 cents, jumper 25 cents. Part 1 or part 2 separately. Price: Cloth 25 cents, paper 15 cents. It would have been difficult if not impossible to print the Catalog in the short time remaining for publication before the A. L. A. conference at St. Louis without the energetic efforts of the various members of the Library of Congress staff — especially, if any may be particularly mentioned — of Miss Irene Gibson, Mr F. Neumann and Mr W. D. Johnston, who has devoted to it much outside time; or without the prompt and efficient cooperation of the chief of the Catalog division all of his assistants, who not merely prepared but, under the direction of Miss E. A. Runner, proof rea<l the Dictionary section.
The preparation and proofreading have involved the constant services, in a<ldition to the supervision of the Chief, of no less than seven catalogers for the past eight months. Unofficial time has been f» eely given. The remarkable speed with which the Public Printer has put the matter into type, on the press, and through the bindery, is due largely to the personal interest of the Foreman of Printing, Mr O. J. Ricketts, and the ready response of his staff, who have applied freely the vast typographic resources at their command.
book details : Download 29 MB