The lords of the ghostland; a history of the ideal 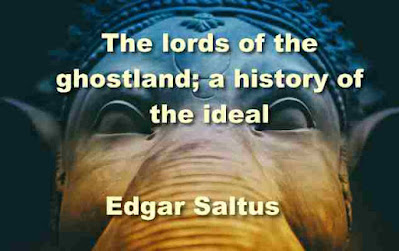 Excerpt
The ideal is the essence of poetry. In the virginal innocence of the world, poetry was a term that meant discourse of the gods. A world grown grey has learned to regard the gods as diseases of language. Conceived, it may be, in fevers of fancy, perhaps, originally, they were but deified words. Yet, it is as children of beauty and of dream that they remain. "Mortal has made the immortal," the Rig-Veda explicitly declares. The making was surely slow. In tracing the genealogy of the divine, it has been found that its root was fear.
The root, dispersed by light, ultimately dissolved. But, meanwhile, it founded a religion, which, revealed in storm and panic, for prophets had ignorance and dread. The gods were not then. There were demons only, more exactly there were diabolized expressions invented to denominate natural phenomena and whatever else perturbed. It was in the evolution of the demoniac that the divine appeared. Through one of the time's unmeasurable gaps there floated the idea that perhaps the phenomena that alarmed were but the unconscious agents of superior minds.
At the suggestion, irresistibly a dramatization of nature began in which the gods were born, swarms of them, nebulous, wayward, uncertain, that, through further gaps, became concrete, became occasionally reducible to two great divinities, earth, and sky, whose union was imagined a hymen which the rain suggested and from which broader conceptions proceeded and grander gods emerged. The most poetic of these are perhaps the Hindu.
At the heraldings of newer gods, the lords of other ghostlands have, after battling violently, swooned utterly away. But though many a fresher faith has been brandished at them, apathetically, in serene indifference, the princes of the Aryan sky endure. It is their poetry that has preserved them.
To their creators, poetry was abundantly dispensed. To no other people have myths been as frankly transparent. To none other, save only their cousins the Persians, have fancies more luminous occurred. The Persians so polished their dreams that they entranced the world that was. Poets can do no more. The Hindus too were poets.
They were children as well. Their first lisp, the first recorded stammer of Indo- European speech, is audible still in the Rig-Veda, a bundle of hymns tied together, four thousand years ago, for the greater glory of Fire. The worship of the latter led to that of the Sun and ignited the antique altars. It flamed in Persia, lit perhaps the shrine of Vesta, afterwards dazzled the Incas, igniting, meanwhile, not altars merely, but purgatory itself. In Persia, where it illuminated the face of Ormuzd, its beneficence is told in the Avesta, a work of such holiness that it was polluted if seen. In the Rig-Veda, there are verses that were subsequently accounted so sacred that if a shudra over-heard them the ignominy of his caste was effaced.
The verses, the work of shepherds who were singers, are invocations to the dawn, to the first flushes of the morning, to the skies' heightening hues and the vermillion moment when the devouring Asiatic sun appears. There are other themes, minor melodies, but the chief inspiration is light. To primitive shepherds, the approach of darkness was the coming of death. The dawn, which they were never wholly sure would reappear, was the resurrection. They welcomed it with cries which the Veda preserves, which the Avesta retains and Edda's repeat.
Contents:
I Brahma 7
II Ormuzd 39
III Amon-Ra 60
IV Bel-Marduk 81
V Jehovah 109
VI Zeus 140
VII Jupiter 166
VIII The Nee Plus Ultra 189

Download The lords of the ghostland; a history of the ideal - PDF ebook  2.9MB