The history of the papacy in the XIXth century 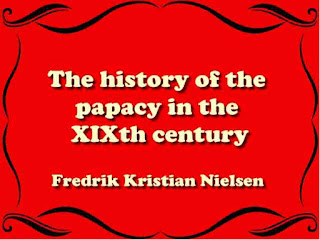 Excerpt from the author's preface:
When I first put forth this sketch of the modern Papacy, I had never seen Rome, and I hardly knew the Roman Church except through books. I owe it to the Ministry for Ecclesiastical and Educational Affairs, and the Carlsberg Fund, that in repeated visits to Italy, Germany, France, and Belgium, of longer or shorter duration, I have been enabled to make studies for this work and to become personally acquainted with several of the men who have taken a part in making the recent history of the Papacy. It was my idea to conclude my account with a brief view of the chief points in the papacy of Leo XI 1 1., like those pages in the First Edition which dealt with the years immediately following the Vatican Council. But I have abandoned that design for several reasons.
When I came to put down on paper the last portion of my work, I saw clearly that the right appreciation of a papacy which, like that of Leo XIII., is largely occupied with the solution of diplomatic problems and the publication of Encyclicals on social questions, could not be formed without going pretty fully into things. It is my hope before long to be able to offer such a representation, which would then serve as an independent supplement to this book, and so to fulfill a desire which has been expressed on many sides.
The completion of the book, contrary to my desire, has been deferred. The delay has been caused partly by one or two large and unforeseen interruptions in my daily work, partly by the extent of the literature that had to be mastered, and by frequent difficulties in obtaining the sources which have been used in the concluding sections. I had reached the middle of my work before I received such important contributions to the later history of the Papacy as Purcell's Life of Cardinal Manning (2 vols., London 1895), the last volume of Ricasoli's Lettere e documenti (Firenze 1895), the first portions of the Rivista storica del risorgimento Italiano (Torino i895f), which contain amongst other things extracts from Castagnola's accounts of the ministerial conferences in 1870, and Nigra's Ricordi diplomatic*, del 1870 (in the Nuova Antologia for 1st March 1895). I felt that it would be inexcusable to finish the book before this new material had been worked into the account, but this required time.
The Author of this book, Dr. Fredrik Nielsen, was born at Aalborg in the year 1846. After being ordained in 1873, he was appointed in 1877 Professor of Divinity (Ecclesiastical History) at the University of Copenhagen. The year before his appointment to that post the first edition of this book was published.
The second and much-altered edition came out, one volume at a time, in 1895 and 1898. Two years after this latter date, he was appointed Bishop of his native town of Aalborg. He had not been Bishop of Aalborg more than five years when the government offered him the see of Odense, in Fyen. It was an attractive offer. The see of Odense is better endowed than that of Aalborg. It has an interesting cathedral, and it lies several hours nearer to Copenhagen and its libraries. But Bishop Nielsen felt that his work at Aalborg was not yet done, and he refused the offer. Last year, the government made a fresh proposal. Aarhus is the chief town of Jylland or Continental Denmark, and the second-largest city in the kingdom. Its cathedral rivals Roskilde in beauty if it does not excel it.
Important educational schemes are under consideration, involving probably the creation of a new university at Aarhus, and the government felt that no one could so well superintend the carrying out of such a project as Bishop Nielsen. Yielding to pressure from many quarters, Bishop Nielsen consented to the translation and now presides over the important diocese of Aarhus.
Translated by Arthur James Mason
Publication date:1905
Download