The Chaldean Account of Genesis (1876) with Illustrations. by George Smith 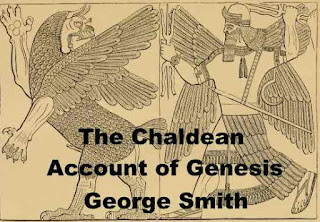 Some explanation is necessary for introducing my present work. Little time has elapsed since I discovered the most important of these inscriptions, and in the intervening period, I have had, amidst other work, to collect the various fragments of the legends, copy, compare, and translate, altering my matter from time to time, as new fragments turned up.
Even now I have gone to press with one of the fragments of the last tablet of the Izdubar series omitted. The present condition of the legends and their recent discovery alike forbid me to call this anything more than a provisional work; but there was so general a desire to see the translations that I have published them, hoping my readers will take them with the same reserve with which I have given them. I have avoided some of the most important comparisons and conclusions with respect to Genesis, as my desire was first to obtain the recognition of the evidence without prejudice.
. The chronological notes in the book are one of its weak points, but I may safely say that I have placed the various dates as low as I fairly could, considering the evidence, and I have aimed to do this rather than to establish any system of chronology.
I believe that time will show the Babylonian traditions of Genesis to be invaluable for the light they will throw on the Pentateuch, but at present, there are so many blanks in the evidence that positive conclusions on several points are impossible.
I may add in conclusion that my present work is intended as a popular account, and I have introduced only so much explanation as seems necessary for the proper understand- ing of the subject. I have added translations of some parts of the legends which I avoided in my last work, desiring here to satisfy the wish to see them as perfect as possible; there still remain however some passages which I have omitted, but these are of small extent and obscure.
George Smith, (born March 26, 1840, London, Eng.—died Aug. 19, 1876, Aleppo, Syria), English Assyriologist who advanced knowledge of the earliest (Sumerian) period of Mesopotamian civilization with his discovery of one of the most important literary works in Akkadian, the Epic of Gilgamesh. Moreover, its description of a flood, strikingly similar to the account in Genesis, had a stunning effect on Smith’s generation.
Download The Chaldean Account of Genesis PDF ebook