The world and the individual 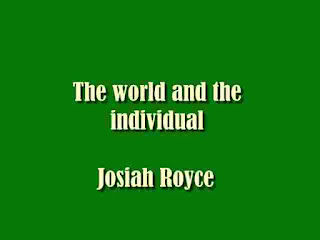 While this central matter regarding the definition of Truth, and of our relation to truth, has not essentially changed its place in my mind, I have been doing what I could, since my first book was written, to come to clearness as to the relations of Idealism to the special problems of human life and destiny. In my first book, the conception of the Absolute was defined in such wise as led me then to prefer, quite deliberately, the use of the term Thought as the best name for the final unity of the Absolute.
While this term was there so defined as to make Thought inclusive of Will and of Experience, these latter terms were not emphasized prominently enough, and the aspects of the Absolute Life which they denote have since become more central in my own interests.
The present is a deliberate effort to bring into synthesis, more fully than I have ever done before, the relations of Knowledge and of Will in our conception of God. The center of the present discussion is, for this very reason, the true meaning, and place of the concept of Individuality, in regard to which the present discussion carries out a little more fully considerations which appear, in a very different form of statement, in the Supplementary Essay, published at the close of The Conception of God. As for the term Thought, I now agree that the inclusive use which I gave to it in my first book is not wholly convenient; and in these lectures, I use this term Thought as a name for the process by which we define or describe objects viewed as beyond or as other than the process whereby they are defined or described, while, in my Religious Aspect of Philosophy, the term, as applied to the Absolute, referred not only to finite processes of thinking, but also, and expressly, to the inclusive Whole of Insight, in which both truth and value are attained, not as objects beyond Thought's ideas, but as appreciated and immanent fulfillment or expression of all the purposes of finite Thought.
This usage seems to be less effective for purposes of exposition than that which I have tried to employ in this book. Besides, I now more emphasize the distinctions there already implied, while I surrender in no whit my assurance of the unity of God and the World. As for the present discussion, it is useless to defend its methods to people who by nature or by training are opposed to all thoroughgoing philosophical inquiry.
Such are nowadays accustomed to say that they are already well aware of the limits of human thinking and that they confine themselves wholly to "the realm of experience." It is useless to tell them that this book also is an inquiry regarding just this realm of experience. For such critics after a fashion not unknown amongst people who think themselves to be " pure " empiricists, will of course know, quite a priori and absolutely, that there is nothing absolute to be known.
Not for such critics, who may be left where God has placed them, but for still open-hearted inquirers, I may as well say, however, that, to my mind, the only demonstrable truths of an ultimate philosophy relate to the constitution of the actual realm of Experience, and to so much only about the constitution of this realm as cannot be denied without self-contradiction. Whenever, in dealing with Experience, we try to find out what, on the whole, it is and means, we philosophize.
Download PDF ebook 19.3 MB