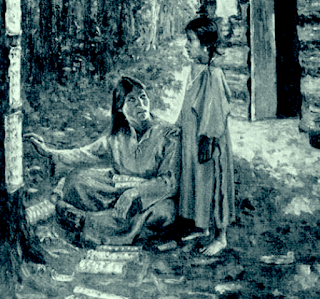 Stories told by and about the Indians, have been gathered from various sources. They show, among other interesting facts, that the love of the beautiful, and also of the humorous, dwells in the heart of the wild Indian.
There are no adaptations from Longfellow s poem of Hiawatha, but the compiler has gone directly to the works of Schoolcraft, whose writings were Long fellow s inspiration. Schoolcraft s Journal states his belief that Menabozho and Hiawatha were one and the same person, the latter name being preferred as more musical. Hence, Longfellow chose it as the name of his Indian hero. Horatio Hale and other authorities on Iroquois history differ strongly from Schoolcraft on this point and maintain that the name of Hiawatha, or Heyanwatha, refers only to an Iroquois statesman or deity. Menabozho, or The Foolish One, is very real to the Chippewa or Ojibway Indian of Minnesota,
The various names of Missaba, Mesaba, Michabo are merely English or French renderings of the same Algonquin word. The later stories herein told, which were gathered from the Chippewas in 1895, 1896, and 1900, prove their unchanging love for the tales of this imaginary hero. Attention is called to the very interesting pictures on pages 17, 43, 53, 55, 89, 100, 173, and 188, which are from photographs taken by George Wharton James, of Pasadena, Cal, the noted authority upon Indian life and basketry. The copyrighted pictures on pages 43 and 55 are used in this book with his special permission. In addition to the numerous illustrations from photographs, Miss Angel de Cora, a young Indian artist of great promise, has contributed three full-page sketches, the cover design, and numerous initials and designs.
The pictorial features, therefore, reproduce with unusual fidelity the atmosphere of Indian life. NOTE. In answer to inquiries the compiler desires to state that according to the census reports of 1900 there are fifteen American cities any one of which contains more inhabitants than the total number, 266,760, of our taxed and untaxed American Indians; of these nearly one half are in Indian Territory, Alaska, and Arizona.