How they made superman fly 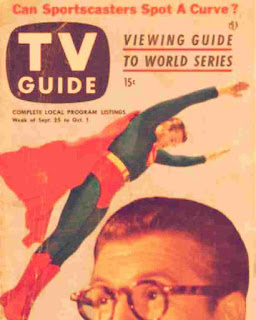 It is film trick kiddies, so Do not any Takeoffs.
Superman is a 1948 15-part Columbia Pictures film serial based on the comic book character Superman. It stars an uncredited Kirk Alyn (billed only by his character name, Superman; but credited on the promotional posters) and Noel Neill as Lois Lane. Like Batman (1943), it is notable as the first live-action appearance of Superman on film, and for the longevity of its distribution.
The serial was directed by Thomas Carr, who later directed many early episodes of the Adventures of Superman television series, and Spencer Gordon Bennet, produced by Sam Katzman, and shot in and around Los Angeles, California. It was originally screened at movie matinées, and after the first three scene-setting chapters, every episode ends in a cliffhanger. The Superman-in-flight scenes are animations, in part due to the small production budget. It was a "tremendous financial success" and played in "first-run theatres that had never before booked a serial."
The serial was a popular success that made Kirk Alyn famous and launched Noel Neill's career. A sequel serial, Atom Man vs. Superman, also directed by Bennet, was released in 1950.
Download PDF magazine