The gift of the spirit (1913) by Prentice Mulford 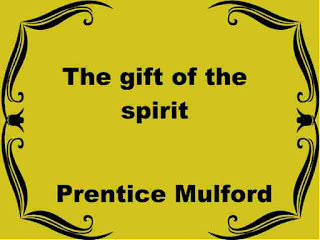 Excerpt from Prentice Mulford's preface
The modest hope which finds expression in the Introduction to these essays has obtained its realization in the best manner which could have been anticipated for a work of the kind. This little volume has been the means of making Prentice Mulford better known and more appreciated.
It has won its way continuously but unobtrusively, and indeed almost in secret, without appealing through the ordinary channels of publicity, and the exhaustion of a considerable edition, which, in the first instance, seemed greater than the likelihood of the demand, goes to show that it has overstepped the restricted circle of transcendental interest for which it was originally designed.
The publication of a second edition offers an opportunity for a few words on the kind of influence exercised by Prentice Mulford, as an extension of the remarks which appear in the original Introduction.
Mulford's gift is described by the title of this selection as a Gift of the Spirit, and so it is assuredly. But the term is too general to account for that which was in itself so particular, though it is not easy, nor perhaps really possible, to place his gift within the limits of a definition.
There is in him a sense of awakening and consciousness which may perhaps be held to correspond to that which has been loosely and somewhat ostentatiously attributed to a number of persons — some dead and some living — under the 8 Preface catchword of "cosmic consciousness."
This includes and surpasses that which has been heretofore understood by a sense of the solidarity of Man and Nature, or it is that sense informed by an unusual vitality; it may perhaps be described as the consciousness in common of Man and Nature, the participation of the individual in the world's life realized. It is the consciousness which was possessed beyond all known measures by Walt Whitman, and it accounts for his universal sympathies; it is the ground of comparison between Mulford and Whitman, in most things else unlike, and it seems certain that those who understand the colossus of Manhattan, who, in his order, was without peer or parallel, will understand also, even if they fail to appreciate, the obscure seer of Long Island. But in the end and because of the gift, it is credible that they will also appreciate him, in spite of the strange motley of his transcendental appanage. Except in special instances, the defects of Prentice Mulford, and these are grave and numerous, are not likely to be recognized by those who, themselves transcendentalists, are charmed by his gifts. Nor, if recognized, would these defects be likely to irritate or even disturb them.
A catholicity which brings him into contact with many spiritual interests, outside those which are accredited commonly, and with many forms of thought, outside all accepted conventions, while essentially a part or consequence of his gift, makes him appeal to many who may be but imperfectly aware of that gift, for these spiritual interests and these forms of thought, as regards all departments of speculation, are now diffused widely.
There is much to admire and not a little to deplore in such Preface 9 independent and commonly untutored speculations, but Prentice Mulford responds to all their hardihood, shares in all their insight, and bears all their marks of inexactitude and insufficiency, while, through all, he strikes other chords, deeper and higher, and over and above the untutored thought finding words upon an untutored tongue, there comes from time to time, as from beyond all time and ken, the rumor of the word of life, untaught, suddenly communicated and irrepealable. Seeing that Prentice Mulford presents himself in some sense as a teacher, speaking, that is to say, with a certain accent of authority, which authority rests very largely upon a divining faculty, it is useful to distinguish what is from what is not to be expected from the doctrinal part of his instruction.
Download The gift of the spirit 14.6 MB PDF ebook