The book of Enoch, or, 1 Enoch 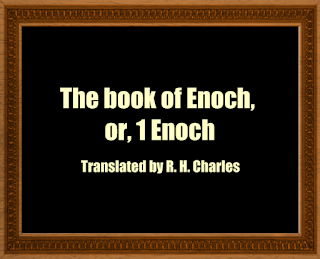 This is not so much a second edition as a new book. A brief comparison of the first edition and the present work will make this clear even to the cursory reader. Alike in the translation and in the commentary, it forms a vast advance on its predecessor. I cannot claim to be satisfied with it even as it stands, and yet twenty additional years spent in Apocalyptic and Biblical studies have not, I would fain hope, been fruitless with regard to the present work.
The translation is the first edition was made from Dillmann's edition of the Ethiopia text, which was based on five MSS. With a view to this translation, the present editor amended and revised Dillmann's text in accordance with nine hitherto uncollated Ethiopic MSS. in the British Museum, and the Greek and Latin fragments which had just come to light, but notwithstanding every care, he felt his work in this respect to be of a wholly provisional character.
From the date of the publication of the first edition in 1893, he steadily made preparation for an edition of the Ethiopic text and of the Greek and Latin -fragments. This text, which is exhaustive of existing textual materials in these languages, was published by the University Press in 1906, and from this text, the present translation is made. A new and revolutionary feature in the translation is due to the editor's discovery of the poetical structure of a considerable "portion of the work. I call it revolutionary; for such, it proves to be in respect of the critical problems of the text. By its means the lost original of the text is not infrequently recovered, phrases and clauses recognized as obvious interpolations, and not a few lines restored to their original context, whose claims to a place in the text were hitherto ignored on the ground of the weakness of their textual attestation. During the past eighteen years the criticism of the book has made undoubted headway, and that, I am glad to say, mainly in the direction defined in the first edition. The idea of a Grunclschrift, which was accepted by most of the chief scholars in this field till its appearance, and to which is now universally abandoned. poofs, the verification of references, and at times the acquisition of fresh materials.
Some of the content:
§ 1. Short Account of the Book
§ 2. The Title ...
§ 3. Ita Canonicity.
§ 4. The Greek Versions. Editions of these Versions.
§ 5. The Relation of the G' and G« to each other and to E
(the Ethiopia Version)
§ 6, The Latin Version and Quotations.
§ 7. The Ethiopian Version
§ 8. Ethiopic MSS. Relation of the Ethiopic MSS.
§ 9. Editions of the Ethiopic Version...
§ 10. Translations ........
§ 11. Critical Inquiries .......
§ 12, The Different Elements in 1 Enoch
§ 13. Characteristics and Dates of the Different Elements
§ 14. The Poetical Element in 1 Enoch.
§ 15. Original Language of Chapters 6-36— Aramaic; of
Chapters 1-5, 37-104— Hebrew...
§ 16. The Influence of 1 Enoch on Jewish Literature
§ 17. The Hebrew Book of Enoch
§ 18. The Influence of 1 Enoch on Patristic Literature.
§ 19. The Influence of 1 Enoch on the New Testament.
§ 20. Theology . . .
What is the book of Enoch according to Wikipedia?
The Book of Enoch (also 1 Enoch;[note 1] Ge'ez: መጽሐፈ ሄኖክ, maṣḥafa hēnok) is an ancient Hebrew apocalyptic religious text, ascribed by tradition to Enoch, the great-grandfather of Noah.[1][2] Enoch contains unique material on the origins of demons and Nephilim, why some angels fell from heaven, an explanation of why the Genesis flood was morally necessary, and prophetic exposition of the thousand-year reign of the Messiah.
Download PDF book 15 2 MB