How to study and what to study 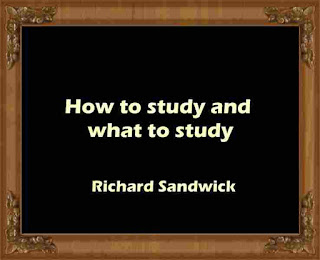 Excerpt:
It is my belief that students have a right to as much and as expert coaching on how to study lessons from books as they receive on how to play football, how to dance, or how to do anything else.
They will generally be grateful for such help. In fact, the learning process may be made the subject of so much thought as to become itself a vital interest, perhaps as potent in holding students in school as are the extra-scholastic activities, such as games, dramatics, initiations, and the like, that are seemingly the only attractions in school and college life for many young people.
My classes have found help in the talks that I have given as I have kept pace with the slowly developing literature of educational psychology. The purpose of this little book is to place before younger students, in a simple form, the general principles of effective study; if it helps its readers, it will have fulfilled its mission. The authors starred below to read the greater part of this book when in manuscript form and helped me with criticisms, suggestions, and encouragement.
The most convincing proof of the value of education that I have ever known came to me in an address by Doctor Carlos Montezuma before a men's club in Chicago. Doctor Montezuma is a full-blooded Apache Indian who was captured, when a child, from an Indian village in Arizona and who continued to be held as a slave long after negro slavery ceased in the South.
With singular vividness and charm, he told the story of this early episode and of his subsequent life: how he was sold for thirty dollars to a Chicago artist who happened to be traveling on the frontier; how he was brought East and sent to school; how he, formerly a nameless young savage, passed through the grades of the elementary and high schools, entered college, and, after graduating there, finished a course of medicine in a professional school.
The government at Washington then engaged his services to visit the western tribes and report upon their condition. He visited, among others, the very tribe from which as a boy he had been taken captive. There he found his people still living under primitive conditions in the wretched little grass-thatched huts that he had known in childhood.
His attention was called to an Indian woman, dirty and unkempt, who was cooking at a fire of sticks before her hut, amid a swarm of flies. From the height of his superior education gained in the white man's schools, he gazed upon her. Outwardly he saw that she w^as unclean, and he knew that within she was the prey to fears and dark superstitions — the ignorant victim of her unsanitary surroundings. She was so wretched an object to look upon, evidently so lacking in feminine tastes and cultured feelings, that as he stood there he found himself wondering whether this woman had a soul.

Download How to study and what to study
6.2 MB PDF book.