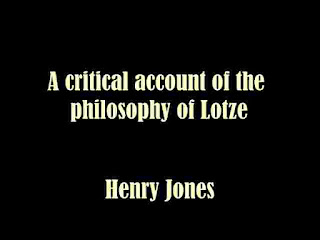 In this volume, I attempt to give a critical account of Lotze's exposition of the nature of thought. That exposition forms, for Lotze, a part of a larger undertaking. Before he could proceed to his main endeavor, and give a metaphysical account of the nature of Reality, it seemed to him necessary to clear the ground of false pretensions set up for thought, partly by the scientific men of his day but mainly by Hegel and his followers.
For these writers, as he understood them, had identified thought with reality, and converted the rich and living world of concrete facts into a fixed system of abstract categories. Lotze, therefore, subjects thought to a most searching analysis, with a view of discovering what in reality is its nature and what, if any, are the limits of its powers. He finds, in the first place, that thought is not an ontological principle. It does not constitute reality but represents it — more or less inaccurately.
Thought mirrors the world of being, produces an image or ideal reflection of it in man's consciousness. That ideal representation of reality we call truth; but the word of truth, though it may- correspond to the real universe, does not constitute it or any part of it. Thought is thus simply a function of man's intelligence. In the second place, it is only one function amongst several others. There is more in mind than thought, and the processes of thinking do not exhaust our intelligent activities. Besides thinking, there are feeling and volition, elements of mind neither less original nor less essential than thought. Nor are the processes of sensation and perception and imagination to be identified with thought without inaccuracy and confusion.
These deal with the individual and the concrete, while thought is exclusively occupied with what is universal and abstract. Thought conceives, judges, and reasons, and besides this, it does nothing further; and the conceptions, judgments, and reasonings which it produces are only relations between the phenomena of mind. In the third place, these functions which are allowed to remain for thought, it performs only with the help of the other intelligent powers which we have named, and upon which thought is entirely dependent. Some of these powers, such as sensation and perception, furnish thought with its material or content; and others, such as " faith," or "the feeling which is appreciative of worth," provide it with its ideal, its impulse, and its criterion, and they give the only guarantee of the validity of its conclusions.
When thus provided with the material on which it has to operate, and with the ideal which it has to realize, thought can rearrange the given data in accordance with general laws, grouping the phenomena of experience in classes, and connecting them in an order of sequence or simultaneity which is necessary.
But its function is wholly and exclusively formal; all that it does is to rearrange, substituting a rational, or ideally necessary, for a contingent connection between mental phenomena. In the fourth place, the systematic world thus created by thought from the data supplied to it, is purely ideal. It is a world of ideas, and not a world of things. There are no things called classes in the outer world of reality; there are none which can be called subjects, and none which can be called predicates, and none which correspond to the copula; nor are reasonings which connect ideas to be confused with causes which connect real objects.
The products of thought are not even similar to anything which exists in the sphere of reality. Nor are real things in any way responsible for them, for they take no part in their creation. Things do not -conceive, nor enter into classes, nor range themselves as subjects and predicates, premises, and conclusions. These arrangements are mere products of thought, and they constitute a world of their own which is at no point in contact with that real-world which they in some way represent.
Author: Henry Jones
Publication date: 1895
Download