Peeps at many lands: Norway with Colored  Illustrations 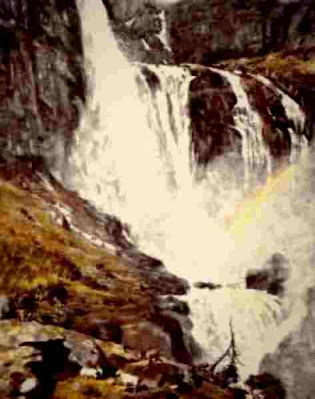 THE LAND OF THE VIKINGS
Who has not heard of the Vikings — the dauntless sea-rovers, who in the days of long ago were the dread of Northern Europe? We English should know something of them, for Viking blood flowed in the veins of many of our ancestors. And these fierce fighting men came in their ships across the North Sea from Norway on more than one occasion to invade England. But they came once too often and were thoroughly defeated at the Battle of Stamford Bridge, when, as will be remembered, Harald the Hard, King of Norway, was killed in attempting to turn his namesake, King Harold of England, off* his throne.
Norwegian historians, however, do not say very much about this particular invasion. They prefer to dwell on the great deeds of another King Harald, who was called “Fairhair,” and who began his reign some two hundred years earlier. This Harald was only a boy of ten years of age when he came to the throne, but he determined to increase the size of his kingdom, which was then but a small one, so he trained his men to fight, built brand new ships, and then began his Norway quests.
Norway was at that time divided up into a number of districts or small kingdoms, each of which was ruled over by an Earl or petty King, and it was these rulers whom Harald set to work to subdue. He intended to make one united kingdom of all Norway, and he eventually succeeded in doing so. But he had many a hard fight; and if the Sagas, as the historical records of the North are called, speak truly, he fought almost continuously during twelve long years before he had accomplished his task, and even then he was only just twenty-one years of age.
They say that he did all these wonderful things because a girl, named Gyda, whom he wanted to marry, refused to have anything to say to him until he had made himself King of a really big kingdom. He made a vow that he would not comb or cut his hair until he had conquered the whole country. He led his men to victory after victory, and at length fought his last great battle at Hafrsfjord (to the south of Stavanger).
The sea-fight was desperate and long, but Harald’s fleet succeeded in overpowering that of the enemy, and Sulki, King of Rogaland, as well as Erik, King of Hardanger, were slain. Then Harald cut and dressed his hair, the skalds composed poems in honor of the event, and forever after he was known as Fairhair. He was truly a great Viking, and he did not rest content with the conquest of Norway alone; for he brought his ships across the North Sea and conquered the Isle of Man, the Hebrides, the Shetlands, and the Orkneys, and he lived to the age of eighty-three.
Download 5 MB PDF Book