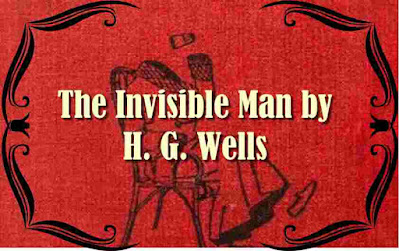 The Invisible Man is a short, thrilling story written during the late 1800s in a time of scientific discovery and invention. The book is about a scientist who discovers and creates a serum to make himself invisible and while the book is mainly about how he lives with this condition.
The Invisible Man is a science fiction novel by H. G. Wells. Originally serialized in Pearson's Weekly in 1897, it was published as a novel the same year. The Invisible Man to whom the title refers is Griffin, a scientist who has devoted himself to research into optics and who invents a way to change a body's refractive index to that of air so that it neither absorbs nor reflects light. He carries out this procedure on himself and renders himself invisible, but fails in his attempt to reverse it. A practitioner of random and irresponsible violence, Griffin has become an iconic character in horror fiction.

Some Quotes from the novel

“All men, however highly educated, retain some superstitious inklings.”

“Alone-- it is wonderful how little a man can do alone! To rob a little, to hurt a little, and there is the

“I went over the heads of the things a man reckons desirable. No doubt invisibility made it possible to get them, but it made it impossible to enjoy them when they are got.”

“The Anglo-Saxon genius for parliamentary government asserted itself; there was a great deal of talk and no decisive action.”

“I never blame anyone," said Kemp. "It's quite out of fashion.”

“...the voice was indisputable. It continued to swear with that breadth and variety that distinguishes the swearing of a cultivated man.”

“Everyone seemed eager to talk at once, and the result was Babel.”
Download The Invisible Man  PDF book