The natural right to freedom 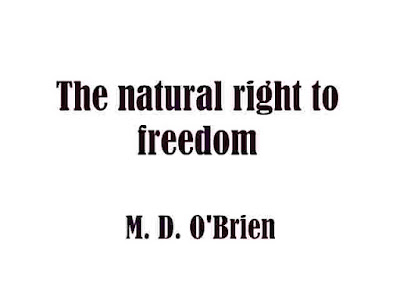 Excerpt:
As Emerson points out in his essay on politics, there is a striking contrast between our behavior towards each other as a man dealing personally with man and our treatment of each other as units of a social aggregate.
When a party of tourists agrees to travel together for a few months, in some new and interesting country, each one is allowed by the rest or such is the tacit understanding to do exactly as he likes so long as he permits others to do the same.
All meet on equal terms, make free agreements, and invariably respect what each one would call his rights and liberties. Not that cases never arise when it would be to the temporary advantage of some to coerce others as for example when cold weather might suggest an equal distribution of coats, rugs, and. Yet nothing of the kind ever occurs, and if the idea were suggested, it would be treated as a joke, with perhaps a hearty laugh all round at the tactics of modern legislators.
Why is this? Why should we be ashamed to treat those we know as we are always trying to treat those we do not know? I should not think of attempting personally to force my neighbor to send his child to school, or to work only a certain number of hours a day, or to abstain from drinking alcohol, or smoking tobacco. I mean I should not do these things in person.
I am too big a coward for that. In fact, I should use honeyed words to him, and say: " My dear Sir, I respect your opinions; I think we are all entitled to hold and act upon our convictions." And then I should go, like a shuffling cur, behind that ingenious contrivance for hiding sneaks the ballot box and vote away from his liberty. I should not do this openly. I should not do it to those I know, even were I stronger than they. Why should I do it in a roundabout way to those I do not know.
Right is a deduction of the understanding, drawn from the implicit claim for free action made by force-worshipper and liberty-advocate alike; a deduction which becomes only more and more unavoidable as men rise in the scale of reason. An idiot cannot understand the axioms and deductions of Euclid, but nonetheless are they binding upon human reason.
The fact is, the laws of the under-standing are as real and unavoidable, as those of the material world to which they correspond. The rational faculty is as rigidly bound by the limitations and conditions of its own nature, as the running stream or the falling rain; and the more rational a man is, the more difficult it is for him to avoid the conclusion that his fellow-being is logically entitled to the same freedom for expressing internal motives in external acts, as he himself is; and, indeed, no one makes a greater claim for this liberty than those who abuse it.
As we have seen, when only two or three are gathered together, this law of rational and logical consistency is recognized as the most sacred and important thing for men to consider in determining their respective activities. We say to the individual bully who attempts to squeeze his fellow-man into some arbitrary pattern, " Let him alone, though a fool, he is a man like yourself and entitled to the same freedom for enacting his folly, and of profiting by the experience it brings, that you are for showing your wisdom
Download PDF book