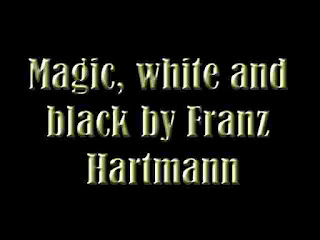 AT the foot of the picture is a sleeping Sphinx, whose upper part (representing the higher principles) is human; while the lower parts (symbolizing the lower principles) are of animal nature.
She is dreaming of the solution to the great problem of the construction of the Universe and of the nature and destiny of man, and her dream takes the shape of the figure above her, representing the Macrocosm and the Microcosm and their mutual interaction. Above, around, and within all, without beginning and without an end, penetrating and pervading all, from the endless and unimaginable periphery to the invisible and incomprehensible center, the " Father " of All, the supreme source of every power that ever manifested or may in the future manifest itself, and by whose activity the world was thrown into existence, being projected by the power of His own will and assuming the form in His imagination.
The Omega (and the Alpha in the center) represent the " Son? the Absolute having become manifest as the Universal Logos or The Christ, the cause of the beginning v . and the end of every created thing. It is One with the " Father? being manifested as a Trinity in a Unity, the cause of what we call Space, Motion, and Substance.
The " regenerated " spiritual man, whose matrix is his own physical body, draws his nutriment from this universal spiritual principle as the physical fetus is nourished by means of the womb of the mother, his soul being formed from the astral influences or the soul of the world. Out of the Universal Logos proceeds the "invisible Light " of the Spirit, the Truth, the Law, and the Life, embracing and penetrating the Cosmos, while the visible light of Nature is only its most material aspect or mode of manifestation, in the same sense as the visible sun is the reflex of its divine prototype, the invisible center of power or the great spiritual Sun.
The circle with the twelve signs of the Zodiac, enclosing the space in which the planets belonging to our solar system are represented, symbolizes the Cosmos, filled with the planetary influences pervading the Astral Light. Here is the storehouse of Life, the Iliaster of Paracelsus, in which the Mysterium magnum (the Spirit) is active.
The activity in the Cosmos is represented by the inter- laced triangle. The two outer ones represent the great powers of creation, preservation, and destruction, , Vishnu, and Siva, acting upon the elements of Fire, Water, and Earth that is to say, upon the original principles out of which ethereal, fluid, and solid material substances and forms are produced. The two inner interlaced triangles refer more especially to the development of Man. B, C, and D represent Knowledge, the Knower, and the Known, which trinity constitutes Mind or Consciousness. E, F, and G represent the Physical Man (Stoola-Sharira), the Ethereal or Inner Man (Sukshma-Sharira), the sidereal body of Paracelsus, astral body, Kama rupa, etc., and the Spiritual Man (Karana- Sharira, the divine Archeus, the Spiritual Soul).
The center represents the divine Atma, the personal Christ, being identical with the Universal Logos. It is, like the latter, a Trinity in a Unity,* receiving its light from the Param-Atma and radiating it again from the center. It is the spiritual seed implanted in the soul of man, through whose growth immortal life is attained. Its light is the Rose of the Cross that is formed by Wisdom and Power, being joined together into one and sending its influence through the world. But below all is the realm of Illusion, of the grossest and heavy, materialized thoughts, sinking into Darkness and Death (the Eighth Sphere of Chaos}, where they decompose and putrefy, and are resolved again into the elements out of which the Universe came into existence.
It will be noticed that the three A's form a five-pointed star in the center of the double interlaced triangle representing the six-pointed star. The five is continually seeking- ing to expand and to come in perfect harmony with the six, while the latter is forever striving to enter the five and to become manifest therein. In other words, the dark and corporified center seeks eternal freedom and light; while the unlimited light seeks for copurification and form. One has a centripetal and the other a centrifugal action, and as neither can conquer the other, there results in perpetual motion; the pulsation of the eternal heart of Divinity; the law of evolution and involution.
If the five-pointed star were to become a six-pointed one if the Rosicrucian Rose had six leaves instead of five this turning of the wheel would have an end; there would be Nirvana, eternal rest MAGIC, white and black, was originally written at a time when I imagined that it was possible by means of intellectual efforts to bore a hole through the veil that covers the mystery of the spirit, and the favor with which the first three editions have been received I attribute to the generally prevailing curiosity of obtaining a knowledge of spiritual things without having to pass through the slow process of becoming spiritual oneself.
As it has been decided to bring out a new edition, I have attempted to remedy its most conspicuous faults and to make such improvements as were suggested by a more extended experience. In this new shape, I can conscientiously recommend it to my American compatriots, and to all who are interested in the study of occultism.
Publication date    1890
Download PDF ebook