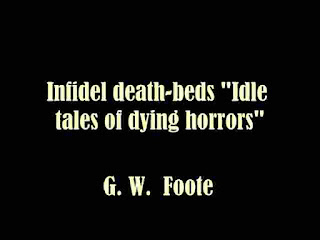 Infidel deathbeds have been a fertile theme of pulpit eloquence. The priests of Christianity often inform their .congregations that Faith is an excellent soft pillow, and Reason a horrible hard bolster, for the dying head. Freethought, the Bay, is all very well in the days of our health and strength when we are buoyed up by the pride of carnal intellect! but ah! how poor a. thing it is when health and Strength fail us, when, deserted by our self-sufficiency, we need the support of a stronger power. In that extremity, the proud Freethinker turns to Jesus Christ, renounces his wicked scepticism, implores pardon of the Savior he has despised, and shudders at the awful scenes that await him in the next world should the hour of forgiveness be passed.
Pictorial art has been pressed into the service of this plea for religion, and in such orthodox periodicals as the British Workman, to say nothing of the horde of pious inventions which are circulated as tracts, expiring sceptics have been! portrayed in agonies of terror, gnashing their teeth, wringing their hands, rolling their eyes, and exhibiting every sign of despair. One minister of the gospel, the Rev. Erskine Neale, has not thought it beneath his dignity to compose an extensive series of these holy frauds, under the title of Closing Scenes. This work was, at one time, very popular and influential; but its specious character having been exposed, it has fallen- into disrepute, or at least into neglect.,
The real answer to these arguments, if they may be called such, is to be found in the body of the present work.
I have narrated in a brief space, and from the best authorities, to " closing scenes " in the lives of many eminent Freethinkers during the last three centuries. They are not anonymous persons without an address, who cannot be located in time or space, and who simply serve " to point a moral or adorn a tale." Their names are in most cases historical, and in some cases familiar to fame; great poets, philosophers, historians, and wits, of deathless memory, who cannot be withdrawn from the history of our race without robbing it of much of its dignity and splendour. In some instances, I have prefaced the story of their deaths with a short, and in others with a lengthy, record of their lives.
The ordinary reader cannot be expected to possess a complete acquaintance with the career and achievements of every great soldier of progress; and I have therefore considered it prudent to afford such information as might be deemed necessary to a proper appreciation of the character, the greatness, and the renown, of the subjects of my sketches.
When the hero of the story has been the object of calumny or misrepresentation when his death has been falsely related, and simple facts have been woven into the tissue of lying absurdity, I have not been content with a bare narration of the truth; I have carried the war into the enemy's camp and refuted their mischievous libels.
One of our greatest living thinkers entertains " the belief that the English mind, not readily swayed by rhetoric, moves freely under the pressure of facts.
I may therefore venture to hope that the facts I have recorded will have their proper effect on the reader's mind. Yet it may not be impolitic to examine the orthodox argument as to death-bed repentances. Carlyle, in his Essay on Voltaire, utters a potent warning against anything of the kind.
Publication date: ( 1892)
Download 8 MB PDF ebook