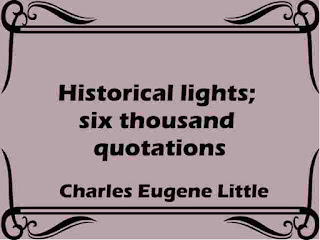 historical statements awaken in the average mind an interest that proves the existence of a hidden element in them, that does not pertain to a mere record of facts. The marvels of history, and its prosy facts as well, not only attest to the oneness of human nature and the unity of human experience, but they also forecast a shadowy premonition of coming events. This thought has found its graceful expression in the words of a German writer, who says: "All history is an imprisoned epic — nay, an imprisoned psalm, and prophecy."
While historical statements address our curiosity for knowledge, they also stimulate the imagination to give realistic coloring to the picture presented to the mind. Hence it is that historical fields will ever prove chosen grounds for reference and illustration by those who address the public. This volume is the outgrowth of certain lines of historical readings, originally designed for the author's personal benefit, and to aid in the preparation of sermons and addresses. After nearly twenty-five years of reading and brief indexing of interesting facts and incidents, a mass of quotations has accumulated, and under the natural law of selection this volume represents the " survival of the fittest."
It is not presumed that the field of selection is exhausted, or that omissions have not been made of numerous interesting statements. Many lengthy selections have been excluded by the plan of the book, which permits only brief extracts. It is merely claimed that a large class of historical facts and fancies which have aided the compiler in his work are in this ready reference form offered by the publishers to others who may value historical allusions and quotations in addressing the public either by the pen or the voice.
This collection is both religious and secular in its character, and the quotations are especially fitting the needs of preachers, temperance and political speakers, essayists in schools, and writers for the press. It is also claimed that the topical arrangement of these quotations, and the extensive cross-reference index, and the index of personal names will greatly facilitate their use by requiring only a brief search to find them and making a previous recollection of the passages unnecessary.
In this way, they may supply in a large measure the lack of a ready memory to those who are unable to recall historical facts and incidents or have forgotten the volume in which they may be found. They may be equally serviceable to those who have but little opportunity for historical readings. These quotations are taken from standard histories and biographies and chiefly relate to the early civilized races and the English and American peoples.
Those taken from the Holy Scriptures have been published in a volume by themselves, entitled " Biblical Lights and Side Lights." It has been the aim of the compiler to present each quotation complete in itself, so that it may not be necessary to examine the authority quoted; yet each may be verified by the reader and the connections studied by following the reference which concludes each article. The articles quote the exact words of the various authors, except where otherwise expressed by brackets. The title, watchword, and compiler's addendum, in brackets, will usually so complete the meaning of the quotation that it will not be necessary to make a further examination of the historical connections. When more information is desired, it may frequently be found in the large encyclopedia by those who have not at hand the authorities to which reference is made.
Download Historical lights; six thousand quotations
PDF book 53 MB