Hindu magic: an expose of the tricks of the yogis and fakirs of India 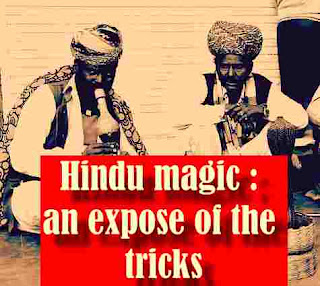 In this pamphlet, I propose to consider the phenomena which are presented by the fakirs and yogis of India and to inquire into their nature and the method of their production.
The feats performed by Indian fakirs are numerous, but I shall describe that most commonly witnessed: the mango-tree trick, the basket trick, the bowl of water trick, the dry sands trick, the rope, and dismembered body test, levitation, snake charming, burial alive, etc. As so much is heard of Indian magic, and the powers of the Oriental performer, it may be well to examine their performances somewhat critically, and to see how far we are entitled to assume that there is anything in them suggesting the supernormal, anything calling for explanations that necessitate the operation of laws "other than those known to Western science.".
I shall begin by describing the famous mango- tree trick — perhaps the best known of all the feats performed by the Indian conjuror. I shall, first of all, describe the performance as it would appear to the uninitiated witness, afterward explaining the secret. As the trick is usually exhibited, it is somewhat as follows:
The native comes forward, almost nude, being covered only with a small loincloth, of such small compass that the onlooker can see clearly that there is nothing hidden in or about it or the performer. As the trick (like almost all Indian tricks) is performed in any locality — on the deck of a ship, in one's own room, etc. — all idea of pre-arrangement, trap-doors, etc., is precluded. The performer advances, carrying in his hands a little earthen or tin pot containing water, and another containing a quart or so of dry sand. He also has with him some seeds of the mango-tree, and a large cloth, about four feet square. This is shaken out and both sides are shown to the spectators, so that they may see that nothing is concealed within it.