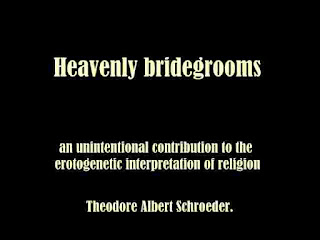 an unintentional contribution to the erotogenic interpretation of religion

Excerpt from the author's introduction:
The Sons of God saw the daughters of men that they were fair, and they took them wives of all that they chose. Genesis 6:2.
In the course of my studies on the erotogenesis of religion, I became interested in the life work and mental characteristics of Ida C., a woman who committed suicide in her forty-fifth year. I first heard of her after her death, but it seemed to me that a psychological study of her would yield rich materials as a contribution to the psychology of religion. Consequently, I bestirred myself to secure information, both biographical and autobiographical. Among the materials gathered was her lifelong correspondence with friends, a number of published essays written by her, some scraps of manuscripts, and two completed but unpublished book manuscripts.
This material will later constitute the subject of my analysis. Ida C -- was for a number of years a college teacher and for a long time associated with various kinds of free-thinking heretics. She was never married. In due time she became the victim of erotic hallucinations to which she gave a "spiritual" interpretation.
Later, when her conduct brought her to the verge of incarceration in a jail or in an asylum, she endeavoured frankly to meet the issue of her own insanity. The resultant investigation to her mind seemed a complete vindication, not only of her sanity but also, of the objective reality and spirituality of her erotic experiences.
This vindication she reduced to writing. The manuscript is now in my possession. It seems to be under the circumstances of this case and the future studies which I am going to make, partly from other papers of the same author, that this is too valuable a document to be mutilated by editing. Furthermore, others should be given equal opportunity with me in the interpretation of this material.
The manuscript had been revised by its author and in a number of places, it was quite impossible to decipher or replace words destroyed by the tearing of the manuscript through frequent handling before it came into my possession. At such places, a word may be occasionally omitted or a connection left defective, otherwise, the following document is in the exact words of its author. This essay, I believe, was written before her thirty-fifth year, that is ten years before her suicide, and twenty-two years before the present publication.
Her subsequent development will be brought out in my own study of her. Just before she wrote this she was a short time a voluntary inmate of asylum and pronounced incurably insane. She left the country to escape legal commitment.
Who is Ida C. Craddock was a 19th-century American advocate of free speech and women's rights. She wrote extensively on sexuality, leading to her conviction and imprisonment for obscenity. Facing further legal proceedings after her release, she committed suicide.
Publiacation date :(1918)
Download PDF ebook 5 MB/