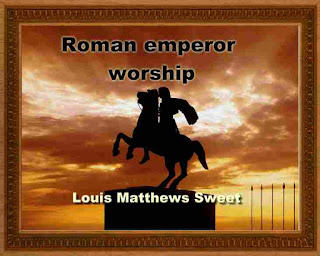 The book was published in 1919 by Louis Matthews Sweet, The book illustrates the cults of worshiping rulers in the history of mankind. and especially among the Romans.
The Roman Imperial Cult began with the first Caesar and continued until the final overthrow of paganism in the Empire. An exhaustive study of the Cult in all its ramifications would practically involve a survey of Roman history during the imperial epoch and would transcend all reasonable limits. A bald analytical review, merely, of the data which have passed under my own eye in the course of this investigation, would break bounds.
A rigid and somewhat painful process of elimination has, therefore, been exercised both in the use and presentation of the available data in this field. Particularly in the matter of the local origins and spread throughout the empire of the ruler-cult, I have been compelled to turn a deaf ear to many alluring suggestions. There are in this region many urgent problems awaiting solution, which I have not ventured even to broach.
They can be solved only by the examination and analysis of hundreds of additional inscriptions and historic references — an undertaking which waits upon occasion fit and appropriate opportunity for a more adequate and exhaustive presentation of the theme may at some future time offer itself. Meanwhile what is herein contained may be counted as vital prolegomena to a great and still largely unworked field of investigation.
"Ars longa, vita brevis est." The quite sufficient task, which I have actually set for myself, is two-fold. First, to exhibit the grounds upon which my conviction rests that the Roman system of imperial deification has a broader context in antiquity, and strikes its roots more deeply into the past than has often been realized even by those most conversant with the facts.
Second, to exhibit the fact and to unfold the significance of the fact, that the imperial cult, to a surprising extent, displaced and superseded, not only the hereditary and traditional gods of the Romans but also absorbed and subordinated the imported cults, both Greek and Oriental, which were superimposed upon the native worship, hastened the decay and overthrow of the entire syncretic aggregation and gradually gathered to itself the whole force of the empire, becoming, in the end, the one characteristic and universal expression of ancient paganism.