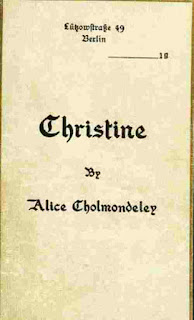 My daughter Christine, who wrote me these letters, died at a hospital in Stuttgart on the morning of August 8th, 1914, of acute double pneumonia, I have kept the letters private for nearly three years, because, apart from the lave in them that made them sacred things in days when we each still hoarded what we had of good, they seemed to me, who did not know the Germans and thought of them, as most people in England for a long while though, without any bitterness and with a great inclination to explain away and excuse, too extreme and sweeping in their judgments.
Now, as the years have passed, and each has been more full of actions on Germanics part difficult to explain except in one way and impossible to excuse, I feel that these letters, giving a picture of the state of mind of the German public immediately before the war, and written by someone who went there enthusiastically ready to like everything and everybody, may have a certain value in helping to put together a small corner of the great picture of Germany which it will be necessary to keep clear and naked before us in the future if the world is to be saved.
I am publishing the letters ju^t as they came to me, leaving out nothing. We no longer these days belong to small circles, to limited little groups. We have been stripped of our secrecies and of our private hoards. We live in a great relationship. We share our griefs; and anything there is of love and happiness, any smallest expression of it, should be shared too. This is why I am leaving out nothing in the letters.
The war hilled Christine, just as surely as if she had been a soldier in the trenches. I will not write of her great gift, which was extraordinary. That took has been lost to the world, broken and thrown away by the war. I never saw her again. I had a telegram saying she was dead. I tried to go to Stuttgart but was turned back at the frontier. The two last letters, the ones from Halle and from Wurzburg, reached me after I knew that she was dead.
Download