Alone in The Wilderness 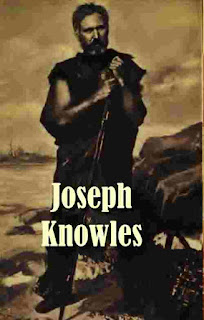 On the Saturday afternoon of October fourth, nineteen hundred and thirteen, just at the time when sunshine marked the end of two days’ heavy rain, I emerged from the Canadian for¬ est on the shores of Lake Megantic, having lived the life of a primitive man for two months in the wilderness of northern Maine.
I was tanned to the color of an Indian. I had a matted beard, and long, matted hair. I was scratched from head to foot by briers and underbrush. Over the upper part of my body, I wore the skin of a black bear, which I had fastened together in front with deerskin thongs. My legs were encased in crudely tanned deerskin chaps, with the hair inside. On my feet, I wore moccasins of buckskin, sewed together with sinew. I wore no hat. On my back was a pack, made from woven lining bark of the 1 2  cedar, in which I carried various implements from the forest.
I had a rude bow and arrows, and a crude knife, made from the horn of a deer, dangled at my waist. It was thus that I entered the little French- Canadian town of Megantic —back to the civilized world. I received a welcome that I had not dreamed of, and I was very happy, for it proved to me at that time that the people were really interested. However, as the hours went on, I began to realize that they considered that I had done a wonderful thing.
It is because of this impression, which seems to have taken hold of many people since my re¬ turn, that I will begin this narrative by saying that it was not wonderful. Above all else, I want to emphasize that my living alone in the wilderness for two months without clothing, food, or implements of any kind was not a wonderful thing. It was an interesting thing, but it was not wonderful. Any man of fair health could do the same thing, provided he meant business and kept his head. But, to the best of my knowledge, no other man in the history of civilization ever did what I did; and for that reason the people

Contents of the books: