A Japanese artist in London

Autobiography of Japanese Painter in English 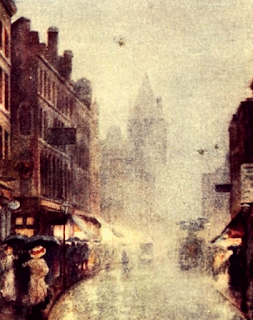 Excerpt from the editor's introduction:
This seems to me to be a book of unique interest. The irresistible humor and the force of Yoshio Markino's writing is well known to critics, for in reviewing his three large color books, " The Color of London," " The Color of Paris," and "The Color of Rome," most of them have given as much space to the single chapter contributed by the artist as they have to the entire letterpress of the book. Nor is this surprising, for Mr. Markino in his quaint English has sometimes an arrestive- ness almost equal to Thomas Carlyle's. There is a real style in it.
He has evolved a grammar of his own which is strikingly effective. In his new volume, " A Japanese Artist in London," he has a subject eminently suited to exhibit the humor and pathos, and forcefulness of his style. For in it he relates his stern battles with starvation and the strange experiences into which he was plunged by the extraordinary success of trades to which his poverty condemned him.
When he first came over he was working in the Japanese Legation and Art Schools. Then he tried starvation for a time. He became a model in one of the Art Schools where he had been a student; then a tombstone-maker at Norwood. Then he starved again until he met his good fairy, Mr. M. H. Spielmann, who (got him various commissions. He helped to stage " The Darling of the Gods "; illustrated magazines and newspapers, not at all in his own line; and finally obtained a commission to illustrate " The Color of London," and arranged an exhibition where he sold the originals. In San Francisco he cleaned windows and scrubbed floors to get the money for his art- school fees, and lived on the bread given to the students to rub out the charcoal; then he made teeth for a dentist; at odd times he has been even a naval architect.
He belongs to a very old Samurai family in Japan, and always kept his starvation and hardships concealed from them with true Japanese Bushido. But now the world is to have the full and unvarnished account of them told in Mr. Markino's inimitable Japanese English — and the result is a book of pathos and humor which comes halfway be-tween Michael Fairless's "Roadmender" and Mr. Dooley's " Impressions." It is a book which will live, for it tells with absolute candor and fidelity of life right down to the bedrock of starvation, and it adds a new variety of humor to British literature. The book was not easily written. I
t perhaps never would have been written if so much of it had not been comprised in his correspondence with Miss Olave Potter, who wrote the letterpress of "The Color of Rome." Some of the matter which is here made public he wrote to her in private, other parts of it were written on her suggestions arising from their correspondence. Some- times Mr. Markino was at a loss for the English word. He replaced it with a picture, going back to the Japanese habit of ideo- grams, and so ingeniously that Miss. Potter was never at a loss to translate it into words. She arranged the manuscript and corrected the proofs. How wisely she refrained from tampering with his English, the reader will see. Its very crudeness has its force, its humor, and not infrequently its pathos, while its artless confessions show that Mr, Markino has as white a soul as ever entered a human body.
He is absolutely candid and entirely without false shame; he records poverty so dire that his work was paralyzed by hunger. He often had to get into bed in the middle of the day to get warm enough to hold his brushes, and at one time walked every day from Kensal Rise to Norwood, except a pennyworth of the tram from Westminster to Brixton, and from Norwood back the whole way to Kensal Rise, which he reached mid-night.
There are no pages which make pleasanter reading than those which record the goodness of the poor landladies to this Japanese castaway; when he could not afford to buy the food they shared their own with him; when he had no money at all they let his bill for lodgings run into pounds. Some went further and lent him the money out of their sav- ings-boxes. When prosperity shone again a little they were always faithfully repaid. He writes of them now in the same terms of equality and friendship as he uses when he is talking about his Cabinet Minister friend. He is as incapable of thinking himself better than the humble as he is of considering himself inferior to the great. At the present moment, he shares his heart between the Cabinet Minister and a shoemaker.
Download PDF book