The New Testament in the original Greek eBook 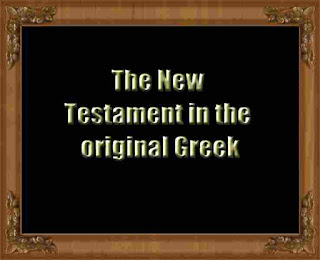 The New Testament in the Original Greek is a Greek-language version of the New Testament published in 1881. It is also known as the Westcott and Hort text, after its editors Brooke Foss Westcott (1825–1901) and Fenton John Anthony Hort (1828–1892). Textual scholars use the abbreviations "WH" or "WHNU". It is a critical text, compiled from some of the oldest New Testament fragments and texts that had been discovered at the time.
Westcott and Hort state: " our belief that even among the numerous unquestionably spurious readings of the New Testament there are no signs of deliberate falsification of the text for dogmatic purposes." They find that without orthographic differences, doubtful textual variants exist only in one-sixtieth of the whole New Testament (with most of them being comparatively trivial variations), with the substantial variations forming hardly more than one-thousandth of the entire text. for more information check Wikipedia.

The extraordinary interest with which the Revised English Version of the New Testament has been received, and the universal desire to form a just and intelligent estimate of its value, have prompted the publication of several treatises, of a critical or of an explanatory character, dealing with the work of the levers, its object, its instruments, its methods, and its results. while such books may be eminently suited to the necessities of the general reader, the purposes of the student and the scholar can be efficiently served only by the text of the New Testament in the original Greek, collated, in accordance with recognized principles of criticism, by men of trained taste and acknowledged ability, from the best sources accessible at the present time.
Such work is opportunely furnished in the beautiful text of Westcott and Hort. In this edition of the New Testament, which has been prepared by the Publishers at the suggestion of several eminent scholars, the Revised English Version has been arranged so as to correspond as nearly as possible, page by page, with Westcott and Hort's Greek text — the two works being printed on opposite pages. This arrangement has rendered necessary in the English portion a partial departure from the order of books adopted by the Revisers, as well as the transposition of a certain passage in the Gospel of S. John (vii. 53-viii. 11) to the end of that gospel. In other respects, the English portion of the Avork is identical Avith the Revised Version as issued by the Publishers, except that a translation has been added of the alternative ending of the Gospel of S. Mark,
While the Revisers' Preface has been omitted, with a view to keep the size of the book within convenient limits. The Greek has been printed from plates containing the final corrections of the editors, and the English from the type used in the brevier editions of the Revised Aversion issued by the Publishers. It is hoped that, by facilitating comparison between the latest English translation and the purest and most recent Greek text of the New Testament, this edition Avill Λνίη for itself a useful and conspicuous place among the practical apparatus of the student and the Biblical scholar.
Published by New York : Harper