The great works of Thomas Paine. Complete. Political and theological. 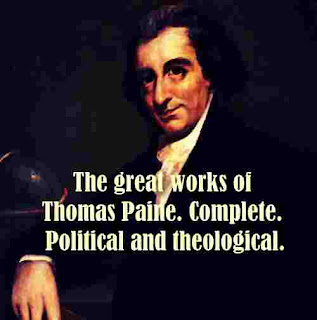 Life of Paine.-- Common sense.--The crisis.--The rights of man.--The age of reason.--Examination of the prophecies.--Reply to the Bishop of Llandaff.--Letter to Mr. Erskine.--An essay on dreams.--Letter to Camille Jordan.--The religion of deism.--Letter to Samuel Adams.
Excerpt from Introduction:
A full and impartial history of Thomas Paine alone can supply that, the omission of which falsifies every work pretending to give an account of the war for the national independence of the united states. The american revolution of 1776, of which thomas paine was the author-hero, was the prelude to that far more sanguinary struggle against oppression and wrong which overturned, or irreparably shook, every throne in western europe; including, in the category, even the chair of st. Peter; and of which struggle the most prominent author-hero was Jean-Jacques Rousseau.
This is generally understood. But a truth incalculably more important has hitherto been either wholly overlooked, or but glimmeringly perceived; it is this: both the American and French revolutions were but prominent incidents, or crisis-stages, in the irrepressible struggle for human rights which commenced when nature implanted in her highest organism, man, that instinct which points to the goal of development; that unconquerable desire for perfect and sufficiently-lasting or "Eternal" happiness, which indicates the common aim and attainable end of science, of art, and of all-natural, materialistic, or intelligible activities: that thirst for liberty which can be satisfied by nothing short of the revolution which will remove all constraint which will accomplish revelation and thus justify Luther, Rousseau, Paine, Fourier, and all other revolutionists.
Of this crowning revolution, the textbook is " the positive philosophy " of Auguste Comte. Had Thomas Paine been seconded as valiantly when he made priestcraft howl, as he was when he hurled defiance against kings, despotism by this time would really, instead of only nominally, have lain as low as did its minions at Trenton and Yorktown.
The land over which the star-spangled banner waves would not have become the prey of corrupt, spoil-seeking demagogues, nor would Europa now tremble at the nod of a military dictator. Not but that priestcraft itself has a substructure, all but "Supernaturally" profound, which must be sapped before justice can be more than a mockery, freedom aught but a mere abstraction, or happiness little else than an ignis fatuus.
But a man should have continued the great battle for his rights when the soldiers and author- heroes of liberty were in the full flush of victory; instead of making that vain, mischievous, and ridiculous (except as provisional) compromise with the human inclinations.
Called duty; and falling bach, on that miserable armistice between the wretched poor and the unHappy rich, for the conditions of which, consult that refinement of treachery, misnamed a constitution, ^and that opaque entanglement, absurdly entitled law.
Can right be done and peace be maintained, under institutions whose ultimatum is to give half a breakfast to the million, and half a million or so to the 'balance of mankind, conditioned on such anxiety on the part of the latter, lest they be added to the million before dinner-time, that dyspepsia, rather than nutrition, "Waits on appetite ?" is man irremediably doomed to a condition which, at shorter and shorter intervals, forces him to seek re- lief in one of those saturnalias of carnage and devastation which throws progress aback, menaces civilization even, and yet but partially and temporarily mitigates human ills? Is this the whole sum, substance, and end of revolution? It appears to me, that they who believe this, and who admire and commend Thomas Paine from their standpoint, dishonor his memory far more than his professed enemies do or can.
Download 37.7 MB PDF ebook