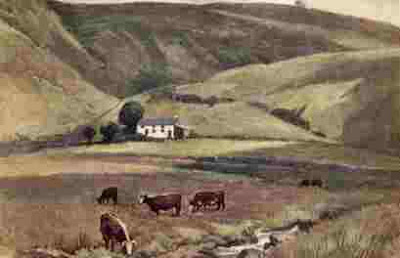 From high Plinlimmon's shaggy side Three streams in three directions glide; To thousands at their mouth who tarry, Honey, gold, and mead they carry. Flow also from Plinlimmon high Three streams of generosity; The first a noble stream indeed Like rills of Mona, run with mead; The second bears from vineyards thick Wine to the feeble and the sick;
The third till time shall be no more Mingled with gold shall silver pour.  There is a lonesome spot, high perched upon the eastern shoulder of many-headed old Plinlimmon, wherein the calm that so often succeeds the storm in these wild uplands you may hear a strange duet.
A melody as old, to be sure, as the eternal hills whose fountains have sung it since they came up out of the ocean in the night of time and fell, piping their cradle songs, into the waste of waters beneath which the lower hills and valleys of wild Wales still lay submerged Nowhere else within my knowledge do two great rivers actually mingle their infant voices, uniting as it were in flood time to break the silence of a still primeval solitude.
Caprice, accident, possibly old map-makers, have long ago decided that to the southern fork of the Wye, a mile away, should be assigned the honor of that river's birth; and not without reason, since it is a trifle longer than the other branch up which a rough road runs from the abandoned lead mine to the smaller one now in operation. But the successful assertion of this particular brook may be said to have had another and narrower escape two miles below from the claims of the Tarenig which, rising high in the very breast of Plinlimmon, joins the Wye at PantMa or on the Aberystwith road. For the Training is at least equal in volume to its rival. Moreover, it continues what up to this point was the mission of the Wye and leads the road traveler up to the high pass over the toe of the Plinlimmon whence he drops sharply down through scenes renowned for their beauty, to the low country of Cardiganshire and the sea. But all this does not prevent one source of the Wye from piping in unison with one source of the Severn, which last again failed to acquire honors, and is known to perhaps a dozen people, as the Hore birthplace