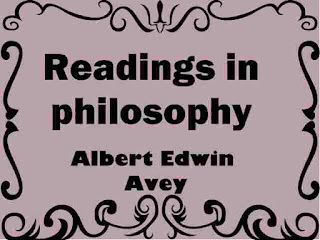 This volume is intended primarily as a supplement to Professor Leighton s "Field of Philosophy". But that work covered so completely the entire territory of the subject that this volume in presenting the sources which Professor Leighton evidently had in mind, becomes a fairly representative collection of the classic passages of philosophic literature, and may possibly be of independent interest to some readers as such a collection.
The necessity for readings supplementary to the other text and the difficulty of providing a reference library with sufficiently numerous copies for large classes afforded the motives for such a compilation.
There are, of course, standard sourcebooks in philosophy in existence; but none of them quite met the situation. Doubtless the ideal plan would be to have the student turn to the complete works and see the passages in their proper settings. This would in many instances stimulate curiosity and lead to further reading of passages of his own selection. It would also make possible the interpretation of important conceptions in the light of parallel references. But this does not prove practicable in actual work. Hence, this volume is offered as something of a substitute. In selecting the passages the effort has been simply to illustrate by means of sources the essential points of Professor Leighton s discussion. In many (v) vi Foreword instances other passages might have been chosen.
Limitation of space and scope made impossible any attempt to present an exhaustive treatment of any topic. Professor Leighton has reviewed the work and given it his general approval. I am indebted to him for suggestions in many places. But I assume responsibility for the choice of most of the selections. I am indebted also to Professor A. R. Chandler for suggestions and assistance, especially in connection with several original translations. My obligations to the publishers and holders of copyrights who have generously allowed me to reproduce material are very great.
Specific acknowledgements are made in connection with the passages printed. In making translations the student was kept in mind rather than the expert critic. For this reason, a somewhat well-established vocabulary has been departed from because of its unfamiliarity to beginners. The translations have been undertaken partly for exercise, partly as the easiest way out of certain difficulties. Of each of them the translator would say, in the words of another and better-known philosopher, "An ill-favoured thing, sir, but my own."

CHAPTER I. PHILOSOPHY, ITS MEANING AND SCOPE
A. The Philosopher the spectator of All
Time and All Existence: Plato, Republic
B. The Degrees of Knowledge: Plato, Republic
C. The Relation of Philosophy to Science;
Spencer, First Principles
D. The Difference Between Philosophy and
Religion : Spinoza, Politico-theological
Tractate
E. The Similarity Between Philosophy and
Religion: Hegel, Philosophy of Religion. 17 -
18 -
CHAPTER II. PRIMITIVE THOUGHT
A. The Attributes of the Soul in Primitive
Thought: Crawley, The Idea of the Soul 21
B. Homeopathic Magic: Frazer, Golden
Bough 28
C. Contagious Magic: Frazer, Golden Bough 33
CHAPTER III. THE DIFFERENTIATION OF PHILOSOPHY AND SCIENCE FROM RELIGION.
A. Native Fallacies of Human Thought:
Bacon, Novum Organum 41
B. Early Greek Philosophy, Fragments . ... 48
CHAPTER IV. ATOMISTIC MATERIALISM
A. Leucippus and Democritus, Fragments. . 62
B. Epicurus: Diogenes Laertius, Lives of
the Philosophers 67
C. Atomism in Roman Thought: Lucretius
Download PDF ebook 22.5 MB