The Nigger of the "Narcissus" 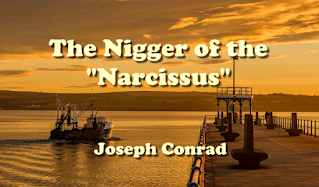 The title character, James Wait, is a dying West Indian black sailor on board the merchant ship Narcissus, on which he finds passage from Bombay to London. Suffering from tuberculosis, Wait becomes seriously ill almost from the outset, eliciting suspicion from much of the crew, though his ostensible plight arouses the humanitarian sympathies of many.
The novel can be seen as an allegory about isolation and solidarity, with the ship's company serving as a microcosm of a social group. Conrad appears to suggest that humanitarian sympathies are, at their core, feelings of self-interest and that heightened sensitivity to suffering can be detrimental to the management of human society.
(Wikipedia)
In 2006, in his critical study of Conrad, John G. Peters said of the work:
The unfortunately titled The Nigger of the "Narcissus" (titled The Children of the Sea in the first American edition) is Conrad's best work of his early period. In fact, were it not for the book's title, it undoubtedly would be read more often than it is currently. At one time, it was one of Conrad's most frequently read books. In part because of its brevity, in part because of its adventure qualities, and in part because of its literary qualities, the novel used to attract a good deal of attention."
Download 10 MB PDF book: The Nigger of the "Narcissus"