Mohammed and Mohammedanism by R. Smith 1889 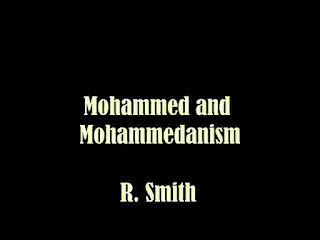 To say that subsequent study, or that the remarks of my critics, have only confirmed me in all my views, would, of course, be equivalent to saying with Pontius Pilate, that ' what I have written I have written; ' a comfortable but a sorry conclusion to come to, for one who is bound to begin by asking himself with Pontius Pilate, 'What is truth?' and, unlike him, must feel bound by the most sacred of obligations to keep his ears always open for the reception of such fragments of the answer as he may be able from time to time to catch.

Some of my views on matters of detail have been modified; but, apart from errors of detail, apart from errors of commission and omission, apart from short-comings incidental to ignorance at first hand of Oriental languages and of Musalman countries, I more and more cherish the earnest hope that the spirit and the purpose with which I have, at least, tried to approach my subject is the right spirit, and the right purpose with which to approach the study of a creed different from one's own.

To dwell on what is good rather than on what is evil ; to search for points of resemblance rather than of difference ; to use a relative and an historical judgment in all things ; to point out what is the out-come of mere human weakness as distinguished from the flaws in the primal documents of the religion, or in the life of its founder ; to discriminate between the accidental and the essential, the transitory and the eternal ; above all, constantly to turn the mirror in upon oneself, and to try to make sure that one is complying with that great principle of Christianity of judging and of treating others as we should wish ourselves to be judged and treated ; this, I am convinced, is the only way in which the better spirits of rival creeds can ever be brought to understand one another, or to sink all their differences in the consciousness of a likeness which is more fundamental than any difference, and which, if it is not felt before, will at least be felt hereafter, in Tliat one far-oflf Divine event To which the wliole creation moves.
These are the aims I have kept, and will continue to keep, steadily in view, however imperfectly I have been able or may yet be able to carry them out. If the alterations or additions, therefore, I have made to the text of my Lectures seem less than those high authorities who have done me the honor of criticizing my book have a right to expect, I would assure them that it is not from any want of respect to their judgment, or because I have not carefully weighed their criticisms.
The dropping of an epithet, the addition of a word here or there, the omission of a note, or the turn of a sentence, will often indicate the silent homage that I have paid, wherever I could do so, to their superior right to speak upon the subject. There may be little to show for it, otherwise than by way of expansion and addition, in the general aspect and arrangement of the book; but there is more than appears at first sight: and, assuredly, the amount of apparent change hearts no proportion at all to the time and care I have taken in making it. And if I have forborne to enlarge my work by dwelling at length, as I have been asked by some critics to do, upon the darker side of the picture, the reason is not that I am ignorant of that darker side, still less because I am indifferent to it, but because it would be wholly inconsistent with the end I have in view.
To denounce fundamental conditions of Oriental society; to ignore the law of dissolution to which Eastern no less than Western dynasties are subject; to confuse the decadence of a race with that of a creed; to be blind to the distinction between progressive and unprogressive, between civilized and uncivilized peoples; to judge of religion mainly or exclusively by the lives of its professors, often of its most un- worthy professors; to forget what of good there has been in the past, and to refuse to hope for something better in the future, in despair or in indignation for what is — all this may occasionally be excusable, or possibly even necessary; but it cannot be done by me so long as I think it neither excusable nor necessary
to understand that from a Mohammedan point of view they advocate something of the spirit, and arrive at some of the results, which it had been my object to urge from the Christian standpoint. I would not, of course, venture to compare my own imperfect work, derived as it is in the main from the study of books in the European languages, and from reflection upon the materials they supply, with works drawn, as I presume, directly from the fountain-head. But if the starting points be different, and the routes are entirely independent of each other, and yet there turns out to be a similarity in the results arrived at, possibly each may feel greater confidence that there is something of value in his conclusions.
.
Download PDF ebook