Lucretius and the atomic 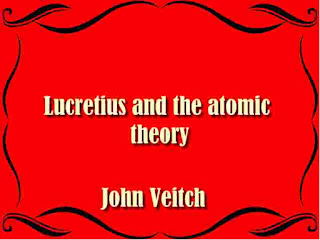 The main interest of the De Rerum Natura, thus, does not depend on simple observation and the description of phenomena, or on an aesthetical contemplation of them.
We have these elements certainly, but they are entirely subordinate in the mind of the poet to the speculative interest in the origin, constitution, and permanence of the system of things which is given inexperience. His imaginative feeling about Nature is of a very marked and intense kind, and it is inseparably connected with his ultimate metaphysical doctrine of the origin of the orderly world. Both the theory and the kind of feeling were new to Roman poetry, and they were never reproduced in its history. Yet, in spirit and manner of treatment, there is a strong native element and Roman flavor about Lucretius.
The Alexandrine school of philosophy and poetry was the fashionable one of his time, idealistic in thought, sentimental in feeling, and delighting in the polish of style and verse. But Lucretius apparently would have none of it. He was repelled by idealizing conceptions and mere embellishment. In his direct description of nature, he is thoroughly realistic and genuine; his speculative theory altogether throws out mind, as a constitutive element; and he preferred to frame his verse after the rough model of Ennius, trusting for the impressiveness of his work to its body of powerful thought, and to the native vigor and sweep of his imagination.
We know that meter frequently modifies thought and feeling by circumscription, that as the meter is fixed, the compass of the thought often falls to be shortened, and its original conscious form changed, by having to pass into the definiteness of the metric mold. The somewhat rough and irregular verse of Lucretius was a better medium for the expression of thought that sought to grasp the indefinite and infinite in things, than the strictly artistic Virgilian line.
The vividness of finished detail, the precision of outline, completeness of portraiture, are characteristic of Virgil's thought and verse; but power, space, and time cannot be altogether definitely grasped. They are the grounds of infinite suggestions; the mind is stirred and left working on the process of the world, and we may thus expect a style less ornate and finished, alike in diction and in structure, than that of the later poet. But with all this, there is no one into the whole series of ancient Roman writers, in poetry or prose, who can be placed alongside Lucretius, for the union of high speculative power, deep moral earnestness, and imagination that rises to the loftiest reaches of awe and grandeur.
The poem is indeed a type in the world of thought of the irrepressible Roman spirit of absolute sover- eignty and love of orderly rule in the world of practical life and action. The speculative poet wished to hold in the comprehensive grasp of his conquering thought the seemingly baffling problem of the rise, the nature, and the limits of the sensible world, to be its master and lord by knowing the secret of its birth and the uniformity of its processes.
He endeavoured to set it within human conception from lowest earth to highest ether: just as the military Caesar, typifying the self-assertion of the Roman character, sought, by the absoluteness of practical power and action, to be the lord of the known world, to bring it to the unity of supreme control, government, and law, from the Euphrates to the Rhine.
And the history of the supposed speculative conquest of the universe is written in the poem of Lucretius in a manner as clear, full, and rounded off, as the history of the Roman conquest of the world was pictured by the Lord of Fire on the prophetic shield of ^Eneas. There is in the poet-philosopher and in the aggressive military statesman the same striving for completeness, for mastery; the same impatience at fragmentariness; and there is in both the same limitation of conception and of purpose, which, though successful for the time, must ultimately give way before the quiet workings of deeper political, intellectual, and spiritual forces than were then supposed to be possible in the nature of man and things.
Download PDF ebook