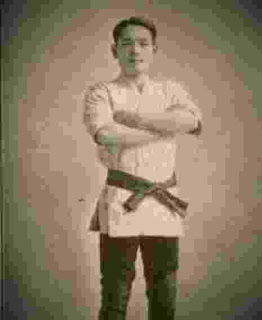 Jiu-jitsu, the much-talked-of Japanese system of self-defense, has attracted so much attention throughout the English-speaking world that its acceptance in this country as a meritorious branch of combative athletics causes not the slightest surprise among broad-minded people.

Like all innovations, especially foreign ones, jiu-jitsu was at first disparaged by scores of people. Some of them still hold to their original opinions, but many have delved deep into the subject, with the result that they now admit the science contains much of striking value. Jiu-jitsu is one of the oldest known branches of self-defense.
Authentic records of its existence before the Christian era are now in possession of the Mikado of Japan. History relates that so far back as 200 years before Christ the supporters of the Japanese emperor of that time fought unarmed against hostile tribes and, aided by jiu-jitsu, completely defeated them. The tribes in question carried the arms of the day, but this advantage availed them nothing against the disconcerting and often deadly tricks of the jiu-jitsu experts.
Since that early period, art has advanced considerably, although the principal tricks have been kept secret. There are some jiu-jitsu maneuvers that have never been explained to Euro- peans or Americans— and probably they never will be. Especially reticent are the "Japs" regarding the dozen or so of death-producing grips and blows. Several of them have been described in detail by them at various times, but others are only hinted at. Athletic Library. These death blows are remarkable. Some are delivered on the spine, others on the neck and head, and two on the face.
There are almost numberless maneuvers that temporarily paralyze nerves and nerve-centers, and others that stop the circulation of the blood in various parts of the body. A large proportion of the tricks and holds introduces the twisting of hands, arms, legs, ankles, and the neck, and many more depend for success on the obtaining of powerful leverage on arms and legs, and on various joints. Thus it will readily be seen that jiu-jitsu is different from boxing and wrestling, although many wrestling maneuvers are used in it, either entirely or in part, or in combination.
For instance, all jiu-jitsu experts use forms of the arm lock, the full Nelson, half Nelson, chancery holds, cross buttocks, arm, and leg grapevines, waist holds, leg holds, and strangles.
There is absolutely nothing in common, however, between boxing and jiu-jitsu. Box- ing is not indulged to any noticeable extent by "Japs." They prefer fencing and wrestling. Still, jiu-jitsu experts execute a trick that might well be termed a first cousin to the boxer's solar plexus punch. It consists of a blow in the solar plexus delivered with the fingers straightened and stiffened, the forefinger (or pointer), and the middle finger. These fingers are projected violently into the solar plexus and twisted in a peculiar manner, completely paralyzing this nerve center.
(The solar plexus is a center of various nerves of the so-called sympathetic system, which has largely to do with the organs of nutrition). The blow also produces breathlessness, and, in cases of poorly trained men, nausea. Jiu-jitsu comprises three different systems or branches and upward of 250 maneuvers. One branch, the most familiar, calls for the use of the hands, another needs a piece of rope and the other a club. However, only the first-named is considered in this book, for it is the one most frequently used. "Jap" experts are, of course, proficient in all three branches.
Download PDF