The Jesus problem: a restatement of the myth theory 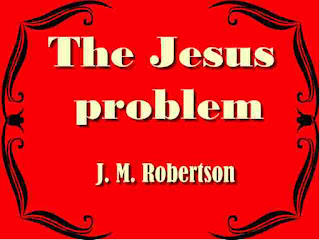 Most of the propositions in mythology and anthropology in this book are founded on bodies of evidence given in the larger works of the author. It seemed fitting, therefore, to refer to those works instead of repeating hundreds of references there given. Readers concerned to investigate the issues are thus invited and enabled to do so.
For brevity's sake, Christianity and Mythology are cited as CM . ; Pagan Christs as P.C.; and the Short Histories of Christianity and Freethought as S.H.C. and S.H.F. respectively. In the first three cases, the references are to the second editions; in the last case, to the third.
The Evolution of States is cited as E.S. Another work often referred to as Sir J. G. Frazer's great thesaurus, The Golden Bough, which is cited as G.B., the references, being to the last edition. Other new references are given in the usual way. The Ecce Dens of Professor W. B. Smith is cited in the English edition. Passages in brackets, in unleaded type, may be passed at a first perusal by readers concerned mainly to follow the constructive theory. Such passages deal controversially with counter-polemic.
As was explained in the preamble to THE HISTORICAL JESUS (1916), that work was offered as prolegomena to a concise restatement of the theory that the Gospel Jesus is a mythical construction. That theory had been discursively expounded by the writer in two large volumes, CHRISTIANITY AND MYTHOLOGY and PAGAN CHRISTS, and summarily in A SHORT HISTORY OF CHRISTIANITY, the argument in the two formers combining a negative criticism of the New Testament narrative with an exposition of the myth-evidence.
Criticism having in large part taken the form of denial that the records were unhistorical, it was necessary to clear the ground by showing that all the various attempts of the past generation to find in the gospels a historical residuum have entirely failed to meet critical tests. Those attempts, conflicting as they do with each other, and collapsing as they do in themselves, give undesigned support to the conclusion that the gospel story is without a historic basis. It remains to restate with equal brevity the myth theory which, long ago propounded on a very narrow basis, has latterly been re-developed in the light of modern mythology and anthropology and has in recent years
This in turn is in itself tentative. If the progressive analysis of the subject matter from the point of view of its historicity has meant a century and a half of debate and immense special literature, it is not to be supposed that the theory which negates the fundamental assumptions of that literature can be fully developed and established in one lifetime, at the hands of a few writers.
The problem " What really happened ? " is in fact a far wider one for the advocate of the myth-theory than for the critic who undertakes to extract a biography from the documents. In its first form, as propounded by Dupuis and Volney, the myth-theory was confined simply to certain parallelisms between Christian and Pagan myth, and to the astronomical basis of a number of these. From this standpoint, the actual historic inception of the cult was little considered. Strauss, again, developed with great power and precision the view that most of the detail in the gospel narrative is myth construction on the lines of Jewish prophecy and dogma.
But Strauss never fully accepted the myth theory, having always assumed the existence of a teacher as a nucleus for the whole. As apart from the continuators of Dupuis and Volney, it was Bruno Bauer who, setting out with the purpose of extracting a biography from the gospels, and finding no standing ground, first propounded a myth- theory from that point of view.
Download The Jesus problem PDF ebook 13  MB.