High treason; the plot against the people 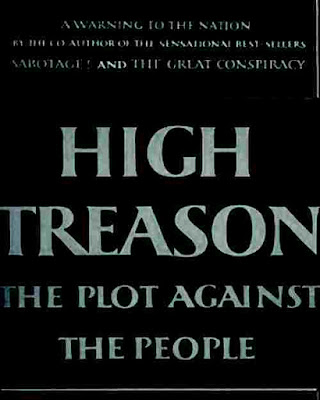 The greatest treason is not treason against governments but against human beings. Treason against the people is committed in many diverse ways. Oppression through violence, terror, and inquisition; the exploitation, despoilment, and impoverishment of millions of men and women; despotic laws and the use of the courts as instruments of repression; fraudulent propaganda amid the artificial pitting of one section of the public against another; the malting of wars and the monstrous alchemy of converting man's blood into gold: all these are forms of treason against the people. And common to all of them is the fierce determination of a privileged minority to retain their power and increase their advantages at the expense and suffering of the great majority.

Treason against the people is not a new phenomenon in the world. Its dar\ thread runs through the pattern of all recorded history. But in our epoch, as the strength of the people has achieved unprecedented proportions and their demand for a better life has become implacable, the measures of the few to sub- jugate the many have grown increasingly ruthless and desperate. Fascism was a product of that ruthlessness and desperation. The German citizen who actively opposed the Nazi regime was not a traitor but a true patriot; it was the Nazi Government that was traitorous. This boo\ deals with treason against the American people.

The crimes and conspiracies its records do not ma\e for pleasant reading, and much of its content will be deeply shoeing to the average American. Yet there is every reason why Americans must comprehend the treasonable devices employed against them in the id past and so gravely menacing them in the present. The maintenance of democracy in America, and of peace in the world, depends largely upon this understanding. It is in the hope of increasing this understanding, and of activating Americafis against the mounting danger in the land, that this boo\ has been written.