The Corsican Brothers and Otho, the Archer (1904) by Alexandre Dumas translated by A. R. Allinson. 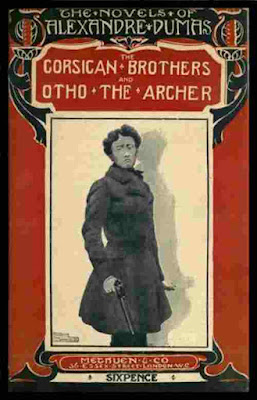 From the translator's preface:
"Corsican Brothers " at any rate is very familiar to English readers, who know the play, founded on the romance and bearing the same title, even when they are quite unacquainted with the novel. The tale is short and thrilling, the plot, like that of the Mencechmi, the Comedy of Errors, and so many other dramas and romances of all periods and countries, turning on a remarkable likeness between two brothers.
It is one of Dumas' minor masterpieces (if this is not a contradiction in terms), and besides the striking story of the twin brothers, Louis and Lucian de Franchi, the strange supernatural bond between the two, and Louis' tragic fate, contains a series of brilliant and fascinating descriptions of Corsican scenery and Corsican life. Corsica, the land of the vendetta and the Vanquis, the ancestral home of Napoleon, the "86th Department of France," so widely different from all the rest and retaining so much of old-time customs and in some respects of old-time savagery, had long appealed forcibly to Dumas' imagination, and in 1834  visited and explored the island.
Now Dumas' method of exploring a country was peculiar. He tells us himself what it was like in his preface to Jacquot sans Oreilles ("Crop-Eared Jacquot"): " None but such as have been my traveling companions can properly appreciate the degree of obstinacy I am capable of under circumstances of this sort. Once I nose a legend, a tradition, a bit of history, no objection or opposition whatsoever will turn me from the scent, once the hunt is up."
In this extremely thorough and entirely irrepressible spirit, the great man's companions and hosts must have had some travails quarts there, by the way, Dumas examined the historical sites and ferreted put the legends and local tales of Corsica in the course of his excursions through the island fastnesses, and the result was The Corsican Brothers. The book appeared in 1845, the same year as Monte Cristo in book form, and was dedicated (or, strictly speaking, Vol. II. was dedicated) to Prosper M6rimee, himself the author of a very popular and well-known tale of Corsican life, Colomba. An illustrated edition was published by Marescq in 1853. It is a curious circumstance, in view of the great success which The Corsican Brothers has met with like a play in England (two or three different versions were running simultaneously at different London theatres at the height of its vogue, besides several parodies and burlesques), that Dumas himself, so much addicted to dramatizing his novels, never put this theme on the stage.
Otho the Archer belongs to another category, that of tales drawn from the great reservoir of German medieval legend, brought afresh into vogue by the writers of the romantic revival in the Fatherland. Goethe's Gotz of the Iron Hand and Schiller's Robbers may be taken to mark the beginning of this movement, and were followed by a host of plays, poems, and romances too numerous and too familiar to call for particular mention.
Enough to name the principal authors or a few of the principal: Tieck, Hoffmann, von Arnim, Brentano, Fouque, Rickert, Uhland. The predecessor and inspirer of them all were Sir Walter Scott; and in turn, they were followed by the French romantic school of 1830 onwards,
Download PDF book 7.7 MB