The conduct of life: the ethics of Confucius - Translated by Miles Menander Dawson. 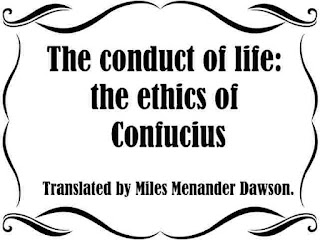 When Confucius died, it is recorded that his last words were regrets that none among the rulers then living possessed the sagacity requisite to a proper appreciation of his ethical philosophy and teachings. He died unhonoured, — died in his seventy-third year, 479 B.C., feeling in the flickering beats of his failing heart that his inspiring pleas for truth and justice, industry and self-denial, moderation and public duty, though then without having awakened men's impulses, would yet stir the depths of the social life of his land.
Though due in part, no doubt, to Confucianism not being a religion and so receiving but scant attention from students of comparative religions to the relatively small interest of Occidentals, until very recently, in things Chinese, and to the somewhat expensive editions in which alone the best translation is available, the want of information concerning these teachings is, in my opinion, chiefly due to this:
They are found in large volumes consisting of ancient Chinese classics which Confucius edited, cf a collection of his sayings, of certain books by his disciples that purport to give his precepts accurately, in one book by his great apostle, Mencius, x who more than a century later led the revival of Confucian ethics which has continued to this day, and in certain books by later followers; and these books consist, in varying proportions, ranging from a minimum of more than half to a maximum of at least nineteen-twentieths, of discourses upon ceremonies, customs, and the like, possibly of great interest to dwellers in China or Japan, but almost absolutely devoid of interest to most Occidentals.
These ceremonies and customs, already firmly entrenched when Confucius was born, doubtless constitute a very rich and expressive language, crystallized into conduct; but it is one which is wholly unintelligible and even repellent to persons of Western origin. The only form, other than this, in which the ethical teachings of Confucius and his followers have been presented, is through books about these teachings, i. e., presenting, in the language of these modern authors, what they consider Confucius and his followers have taught.
The aim in preparing this book is to put before Occidental readers, in the words of the Chinese sage and his followers, as translated, everything concerning ethics and statecraft contained in the Confucian classics which is likely to interest them, omitting nothing of importance. This has been undertaken in the following fashion:
Every such passage has been extracted from all the works comprising the Confucian classics and several from the more important works of early Confucian scholars. These have been arranged by topics in accordance with a scheme laid down as that of Confucius himself in "The Great Learning."
Download the ethics of Confucius  13  MB PDF ebook