Ancient mystic oriental masonry, its teachings, rules, laws, and present usages which govern the order at the present day . 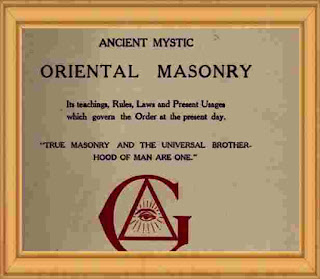 Excerpt from the introduction;
In placing the present work before the public I have no apology whatever to offer, and this is for several reasons. First, because I have been ordered to prepare it, and Second, because much of what I herein give is not new, for the simple reason that there can be nothing new in Masonry.
True, many a thing, especially what concerns Mystic Masonry, has not been given to a profane people, but this is not to say that it is new, for it is not. I know that the present work will stand unchallenged as to the Truths it contains, and this is for the reason that I quote from the highest Masonic authorities in the world, and that which concerns Mystic Masonry comes directly from him who knows and who has no superior in this work.
I also know that I will not be accused of stealing, for the very good reason that I give credit for every single quotation, unless it was changed. With these facts before me, I can feel well satisfied to let it go forward. There are several reasons why this book should go before the people, and especially before Masons themselves.
Too little is known by my Brother Masons concerning that Order to which they have the honour to belong, but which some of them do not honour, and the present work, prepared from the highest authorities, will give them some idea of what the underlying principle of their teachings is. It has also become necessary to let the world know that Mystic Masonry exists and has existed for many years, although not always under that name.
Not much can be said concerning the Order, for the reason that even its degrees may not become known to a pro- fane world. Craft Masons can learn all they desire concerning it, provided they are willing to pay the price, not in current coin, but in their duty and in work. Initiation is not what it is generally supposed to be. All Masons know what Ceremonial Initiation is, but this is simply the outward symbol of the inner work.
A Mason who has the three degrees may think that he has all that can be had, but little does he know of that inner work, that Grand and Supreme Initiation which is possible for those who truly desire it. Thousands of good men take the letter for the Spirit and it is in doing this where the misunderstanding be- gins.
Nothing new can come to Masonry, but there is a world of Truth in Masonry that the vast majority know nothing whatever about, and it is for this reason that the present work is placed before the public and especially before all Brother Masons, and it is sent forth in such a manner that it cannot be denied, for as stated before, it is from the highest authorities among all Masons.
"The Ritual of Freemasonry is based on this natural law, and the ceremony of initiation illustrates, at every step, this principle, and if the result attained is a possession rather than a regeneration, in the great majority of cases, the principle remains none the less true.
The mere inculcation of moral principles, or lessons in ethics, and their symbolic illustration and dramatic representation, are by no means in vain.
These appeal to the conscience and moral sense in every man and no man has ever been made worse by the Lessons of the Lodge. By these ' rites and benefits,' the Freemason is, above all men, in our so-called Modern Civilization, the nearest to Ancient Wisdom. He has possession of the territory in which lie concealed the Crown Jewels of Wisdom. He may content himself, if he will, by merely turning over the sod and gathering only a crop of husks or stubble.
He may dig deeper and find not only the Keystone of the Arch, the Ark of the Covenant, the Scroll of the Law, but, using the Spirit concealed in the wings of the Cherubim, he may rise untrammelled by the rubbish of the temple, and, meeting Elohim face to face, learn also to say 'I am that I am. Does this read like a rhapsody, and are the Landmarks, traditions, and glyphics of Freemasonry nothing more?"
The author ;
Reuben Swinburne Clymer was an American occultist and modern Rosicrucian Supreme Grand Master of the FRC, perhaps the oldest continuing Rosicrucian organization in the Americas