The life and adventures of Nicholas Nickleby 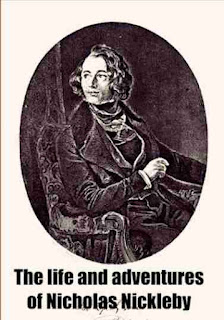 Plot Summary
The novel centres on the life and adventures of Nicholas Nickleby, a young man who must support his mother and sister after his father dies. Nicholas Nickleby's father dies unexpectedly after losing all of his money in a poor investment.
Nicholas, his mother and his younger sister, Kate, are forced to give up their comfortable lifestyle in Devonshire and travel to London to seek the aid of their only relative, Nicholas's uncle, Ralph Nickleby. Ralph, a cold and ruthless businessman, has no desire to help his destitute relations and hates Nicholas, who reminds him of his dead brother, on sight.
Review by Brad:
When the name of the cruel schoolmaster is Wackford Squeers you just know it's going to be good. Nicholas himself can sometimes be a bit prissy but this serves well as a foil for the many extreme characters that surround him (and he's a lot more feisty than the relatively milquetoast David Copperfield). This is classic Dickens at the height of his powers.
Download 21 MB PDF book