The hobo: the sociology of the homeless man 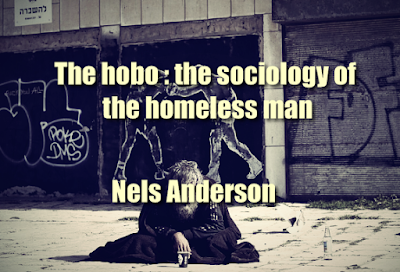 Excerpt from the editor's preface:
on the one hand, to create a world in which he can live, and, on the other, to adapt himself to the world which he himself has created, all, or almost all of the problems and the processes are included with which the student of society is positively concerned. These processes go on, and these problems arise everywhere that men, coming together in order to live, find themselves compelled to carry on common and communal life. In cities, however, and particularly in great cities, where social life is more intense than elsewhere, the processes produce new and strange effects, and the problems are more poignant and pressing.
A changing population of from 30,000 to 75,000 homeless men in Chicago, living together within the area of thirty or forty city blocks, has created a milieu in which new and unusual personal types flourish and new and unsuspected problems have arisen. If the city were to be identified, as it sometimes has been, with its mere physical structure, its buildings, streets, street railways, telephones, and other communal efficiencies; if the city were, in fact, a mere complex of mechanical and administrative devices for realizing certain clearly defined purposes, the problem of the city would be one of engineering and of administration merely.
But this takes no account of human nature; it takes no account of what we have come to refer to in the industry as the "problem of personnel.'' At least it seems to assume that the individual men and women for whom these organized agencies — economic, social, and political — exist, and by whom they are conducted, remain, in all their varied associations and relations, practically the same. Recent observation, on the other hand, has led to the conclusion that human nature, as we ordinarily understand it, while it is based on certain fundamental but not clearly definable human traits and predispositions, is very largely a product of the environment, and particularly the human environment in which the individual happens to find himself.
That means that every community, through the very character of the environment which it imposes upon the individuals that compose it, tends to determine the personality traits as it does determine the language, the vocation, social values, and, eventually, the personal opinions, of the individuals who compose it.
It is the purpose of this and the succeeding studies in this series to describe the changes that are taking place in the life of the city and its peoples, and to investigate the city's problems in the light of these changes, and conditions of life generally of urban people.
For this reason, this study of the "homeless man" has sought to see him, first of all, in his own habitat; in the social milieu which he has created for himself within the limits of the larger community by which he is surrounded, but from which he is, in large part, an outcast. It is interesting to notice that within the area of his own social environment, the hobo has created, or at least there has grown up in response to his needs, a distinct and relatively independent local community, with its own economic, social, and social-political institutions.
Download PDF book