The development of religion; a study in anthropology and social psychology 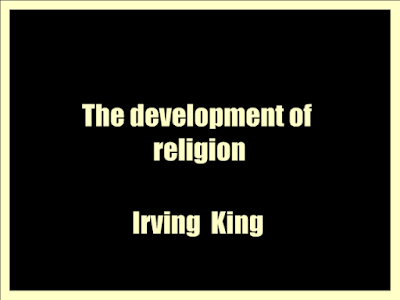 As the subtitle indicates, this volume is a study of the social psychology of primitive religion. It is, however, far from complete as of first planned.
It was the original intention to include a number of topics that are of great interest to the student of primitive religion, such as the development of sacrifice and the origin and development of birth, marriage, death, and burial ceremonies.
The present writer has been very clearly conscious of the limitations of his method, but he is frank to say that his failure to attain satisfactory results in many cases has been due to the very character of the observations collected by the anthropologist. Surely some training in psychology would have rendered some of the laborious undertakings of the student of the natural races much more fruitful of results. There are of course notable exceptions, but it is certainly true that much is yet to be desired in the form in which material regarding the customs of present-day natural races is at present gathered together.
Some of its contents:
CHAPTER 1
Introduction — The Possibility and the Scope of the Psychology of Religion Necessity of a preliminary inquiry into the nature of the material and the possibility of a psychological treatment — Character of previous studies in this field — The differentia of the religious consciousness — Can it be stated best in terms of content or of function? — As far as content goes, leaving preternatural elements (if such there be) out of the account,5eligious states of mind do not appear to be of different sponging. from other aspects of experience5 — The functional differentia — Preliminary statement of the religious end — The logic of supernaturalism and its relation to the psychology of religion — Impossibility of science's recognizing such elements or factors — Every religious experience, from the very fact of its being known at all, must find its place in the causal series of natural science — Attempt of some to confine the scientific treatment of religion to its ' content ' on the ground that religious ' values ' lie essentially beyond the pale of science — Criticism of this position — 'Value' as well as 'content' has natural history, or at least as much natural history as it is possible for any observable fact to have — Import of the psychology of religion for the practical religionist — For the theologian — For the philosopher — The one-sidedness of inquiries into the nature of religion which ignores psychology — The psychological problem restated.
CHAPTER II
Preliminary Questions regarding the Evolution of Religion The first problem that of defining more accurately the nature of the content which maybe supposed to have undergone an evolution — The assumption of some scholars that this is an instinct or other innate capacity — This involves a total misapprehension of the meaning of the term 'instinct' as it is ordinarily used in biological science — The term has probably been seized upon to give a certain glamour of science to the notion that there is a primitive or innate religious 'sense' — Marshall's instinct theory apparently more sci- entific — And yet it is incredible that an instinct opposed to all consciously felt self-interests could ever have developed — Difficulty, on this theory, of accounting for religion as a conscious experience — The religious consciousness more than the parallelistic accompa- niment of instinctive acts — While the history of religion may pre- suppose a sort of original or innate religious ' sense ' as its starting- point, the science of religion must try to break it up into simpler elements — The naJve use of psychological terminology in the science of religion. The religious consciousness is of the valuational type — May be described as an attitude — Definition of — The possible truth in the theories criticised above — The common element of all religions is this appreciative or valuating attitude — A relatively simple aspect of consciousness — TThis is the content, the evolution of which we are to explain — In the evolution of religion we probably do not have to deal with any absolute increase in mentality but only with the building up of complex psychical attitudes — Not much increase in absolute mental capacity since the time of primitive man — Attitudes in general, and the religious attitude in particular, built up in each generation through the objective conditions of the life- process — We do not, therefore, need to presuppose any fundamental changes in mentality. This brings us to the second preliminary problem; namely, that of the conditions which have mediated the developmental process — These are held to be the overt activities of the life process — Attitudes are the outcome of these activities rather than their cause — The consequent close connection between the ethnology and the psychology of religion — The problem of the evolution of religion is then that of showing how this specific type of consciousness has been built up, or differentiated, from a matrix of overt activity and relatively objective phases of consciousness .... 24-43