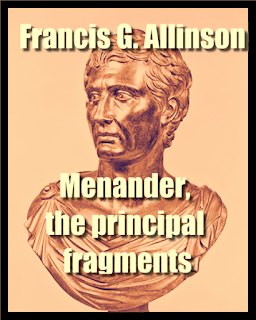 Menander was a Greek dramatist and the best-known representative of Athenian New Comedy. He wrote 108 comedies and took the prize at the Lenaia festival eight times. His record at the City Dionysia is unknown but may well have been similarly spectacular.
Menander, however, was born to be a playwright, not a philosopher. Whatever impulse was needed may well have come from his uncle Alexis, whose Ion"- life spans the century from Aristophanes to the death of Menander and whose two hundred plays bridge easily the transition from the Old to the New Comedy. This rate of productivity was exceeded by the younger poet, who wrote more than one hundred plays in about thirty-three years. Menander's first play, the " Self- Tormentor "


The New Comedy in Menander After the Macedonian conquest the Athenians, lacking the stimulus of complete political independence, turned more and more to rhetoric, to ethical philosophies, to aesthetic complacency and to the New Comedy of Manners.


This New Comedy no longer offers the lyric beauty, the rapier wit, nor — as we know it J in Menander at least — the naked licence and the daring personal or political satire of Aristophanes. It does not, indeed, always nor only seek to provoke laughter, but is the scenic representation of human life: the pathetic, the serious, the gay, the amusing, the commonplace.


Menander's rival, Philemon, with his coarser jests, enjoyed a greater measure of popularity, 2 and so far overshadowed Menander's more delicate character- drawing that the latter won the prize only eight times.
In Menander's fragments, as we know them — barring the ubiquitous courtesan amid the recurring theme of a virgin betrayed — there is scarcely an allusion to offend modern taste, and the few instances of personal satire seem to be confined to his earlier plays.