Life in a thousand worlds 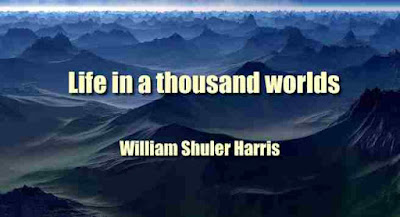 any person having a reasonable education will admit that there are many planetary worlds besides the one on which we live. But whether or not they are inhabited is an open question with most people. We had been in doubt on this point for many years, but now we are settled in our conviction that human life exists in many different worlds of space. "We can give no proof of this except that we have just returned from the greatest journey we ever took.
We went from world to world over long distances of space as easily as one could go from place to place on the surface of our earth. This was a journey of the soul, for surely flesh and bone could not have travelled such amazing distances. At times we w^ere lost to this world, being entirely absorbed in the glimpses of other worlds that were flashing upon our view in happy succession. It can be seen without saying that this book contains no more than a fragment of the things we saw and heard — the fragment that is most easily understood by human creatures born under the rules and regulations of this little dark world of ours.
There are, in certain other worlds, such wide extremes of bodily formation and mental capacities, that a picture of them in word or art would only be unbearable and in some instances decidedly revolting, just because we are trained here to one set of standards and chained to one surface of world conditions. It will be different in the after-death life to those who are wise enough to be pure and good in this world. To make the book as practical as possible we have given a picture of some worlds where human life is inferior to ours, and of others where it is vastly superior, — saying nothing of the millennial life which we found in far off space.
Comparisons are made throughout the book between the life, habits, and customs of other worlds and our own. In picturing the low life of certain worlds we are led to see what a highly favoured and greatly civilized people we arc, and in describing the human achievements of certain other worlds we are led to see how short a distance we have travelled in the path of human glory and civilization. We have also endeavoured to set forth in this humble volume the common relation of all rational creatures of all worlds to one Infinite Creator.
We do not question the truth of this fact, and those who ask for proof must wait to find it. "We hope that this book will be inspiring to every thoughtful mind who loves to learn more and more of the great system of intelligent life of which the human creatures of this world form one link in the chain. If the reading of this volume should open to your mind numberless suggestions and compel you to ask a host of questions, perhaps you will do as we have done, — spend a long time in training your wings to be swift enough to take the journey yourself. If you will not do this, you must patiently wait until the clods of clay are shaken off, so that your free spirit may go out to live the life vaster in other worlds.. We pray that the highest kind of good may result from the truths here advanced. If this shall be accomplished, we shall have our best reward for having given this book to the printing press.

Are There More Worlds Than One?

Why are countless worlds swinging in the endless regions of space? The author believes that thousands are inhabited by intelligent beings.
A Visit to the Moon,
A Visit to the Moon, Description of a novel city of over 60,000 Moonies. The inhabitants of the Moon are described as dwarfs having no noses because they live by eating solid air. Their odd houses, expressive paintings, strange religion, wonderful history, novel government, happy home life, etc., are interestingly described.
A Visit to Mars.
Mar sites are described as giants needing four arms. The ultimate results of capitalistic oppression are graphically portrayed by a curtain system. The description of the Mar sites curtain system embodies a tremendous thrust at monopolistic trusts and should be read by Americans by the millions. The author was captured by Mars men. Illustration.
A Glimpse of Jupiter.
Jupiterites are described as colossal giants averaging twenty-five feet in height. Their language a marvel of simplicity far surpassing the English language. What Jupiterites can see with their powerful magnifying lenses? The author looked through their largest telescope and saw ships sailing in New York City harbour. Illustration.
Beautiful Saturn.
Physical features. Woman the ruling genius. Excursions in airships. Illustration. Marvellous language-music. Churches on Saturn are far better than those on Earth.
The Nearest Fixed Star.
The inhabitants of Alpha Centaurus live as comfortably in the fire as Earthites live in air or fish in the water. One of their aerial fire carriages was described. Illustration.


The Water World Visited.
On Strazza, the people live in water about as fishes do on Earth. Their homes and cities under water described. Fishing for land animals. Illustration. Some of their inventions far surpass those of our own world.
Tortu.
A far more beautiful world than ours. The moral life of Tortu the cleanest found in any world, and interesting reasons were given.
A Problem in Political Economy.
On Airess the inhabitants live on liquid air and hence have neither noses nor lungs. Monopolists control liquid air on Airess as petroleum is controlled on Earth. Illustration. Method of breaking up the power of monopolies. This chapter is worth reading by millions of American men and women.