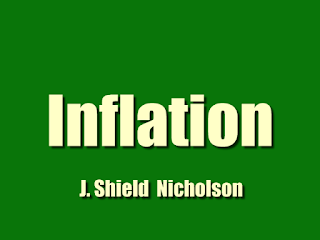 The Prime Minister and the Chancellor of the Exchequer have declared in Parliament that the excess of public expenditure over revenue threatens the country with national bankruptcy and ruin. The gloom of the forecast is justified by figures which are perfectly plain and ought to be understood by every thinking person.
In the last Budget estimate before the war (191 3-14) the total production from taxes was put down at £160 million. For the present financial year, the charge for public debt is £400 million and for pensions £100 millions, that is to say, more than three times the pre-war revenue from taxation. Subsidies for bread, railways, trade and unemployment will absorb at least another £160 millions. In addition, every item of ordinary public expenditure has risen greatly — the Navy and Army, the Civil Services, Education.  Even this is not all. An unknown liability is to be incurred for a magnificent scheme of housing.
The local authorities- are encouraged or commanded to follow the imperial example. All over the country rates are rising — in Glasgow, in many ways- the great exemplar of local government, the rise for this year is two shillings in the pound. The effects of this enormous increase of debt and taxes may be hidden for a time by the pleasing fallacy (examined in the last chapter) that internal debt and taxation make no real difference to the nation as a whole but involve a " transfer of resources " from the less deserving to the nature deserving with an increase in the- national balance of happiness. But there is no such escape from the burden of foreign indebtedness.
Our adverse balance of trade is over £700 million. The invisible exports by which in pre-war days a smaller adverse balance was met have all fallen off. We have less to receive from foreign investments, freights, and financial commissions. The fall in the American exchange has- alarmed our Food Controller. It ought to alarm the Chancellor of the Exchequer stilL more.
The increase in the prices of our imported food is a minor evil compared with the effect of a continued fall in the exchange on British credit. If our currency were on a sound basis and the paper was really convertible into gold, the foreign exchange would correct itself. Gold would be exported, prices in the home country would fall, ' imports would be diminished and exports increased until the balance was restored. But when the home country is on a paper basis there is no such automatic correction of the exchanges.
On the contrary, the evil will probably be aggravated by the provision of more paper money to meet the rising home charges. In the concrete, if our food rises in price, labour will want more bonuses and "there will be a greater demand for money" to be met by more paper. When the revenue does not meet the expenditure how can any increase of expenditure be met except by an increase o^ promises to pay? How can the promises be made effective without the increase of paper money?
Download PDF book